Elbert Sim from Sarawak Grace Church (MJC) blows the shofar as members of his church and the Kuching Minister Fellowship look on.

The number of participants nearly filled the tracks of the venue.

Dancers on stage accompanied the praise and worship segment of the programme.

A comically oversized Santa Claus was spotted leading this section of the crowd.

KUCHING: The tenth Kuching Christmas Parade last night was a delightful profusion of both religious and traditional festive imagery.

Jesus, Mary and Joseph, as well as a host of balloon-winged angels, were just at home here as multiple true-blooded Sarawakian Santas and herds of tropical reindeer people mushing across wet roads, heading in the direction of the city centre.

At a casual glance, this crowd was more sizeable than last year’s turnout. Organisers had hoped to hit the big 10,000 to celebrate their 10th parade, and from the look of it, they very likely have earned the fifth digit last night.

People on foot, bicycles, motorised unicycles and scooters took nearly an hour to clear Kuching City South Council (MBKS) Jubilee Ground, after a round of praise and worship, and prayers from various Christian denominations.

Christmas floats from various churches rolled out after them at interval. The designs lit up the streets with their creativity. There were sleighs with reindeer, the nativity scene that managed to be both larger-than-life and extremely cute.

The streets of Kuching were filled with song and music as over 7,000 singers belted out the festive tunes, six brass bands from the Boys Brigade and Girls Brigade kept the spirits high. These were punctuated by street performances by shofarists, native drummers, tambourine dancers and more. Members of the parade also gave away Christmas gifts to members of the public who turned out to watch in large numbers.

With the theme ‘God So Loved The World’, the parade aims to spread the message of peace and celebrate the true meaning of Christmas with the people of Kuching.

Meanwhile in Miri, about 45,000 people from 15 churches and members of the public thronged the Miri City Fan for a similar Christmas parade last night.

The annual Christmas procession started off in Sibu in the 1970s. Sibu will hold its procession on December 12.

It is one of the symbols of unity that has remained a unique and colourful celebration that can only be found in Sarawak. It not only brings Christians of different denominations together, it also gathered Sarawakians irrespective of race and religion, to share the love and peace with one another.

Christians in most major towns also parade the streets and sing carols as they host respective processions. 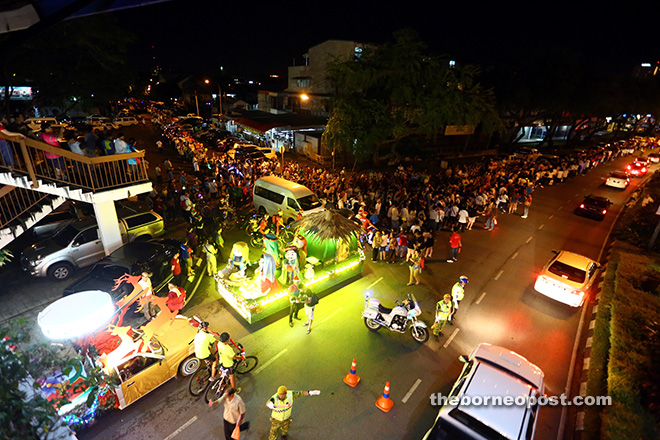 WALK OF JOY: Thousands of Christians gather at the Jubilee Ground for the Kuching Christmas Parade last night. The annual parade was a delightful profusion of both religious and traditional festive imagery. — Photo by Muhd Rais Sanusi