Friday, June 25
You are at:Home»News»Nation»Campaign seeks to promote daily eating of fruits, vegetables among Malaysians 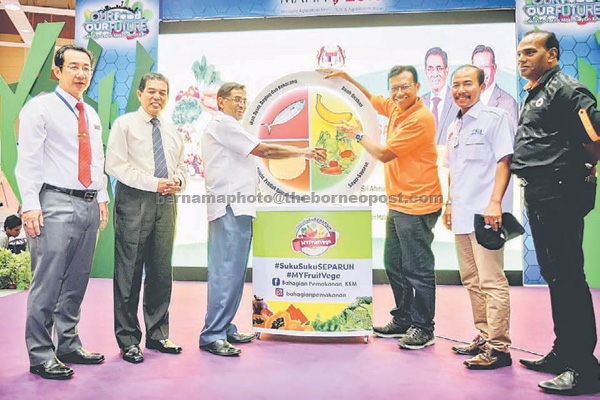 Subramaniam (third left) and Shabery (third right) at the launching of the campaign in Serdang yesterday. — Bernama photo

SERDANG: The Health Ministry yesterday launched the ‘Eat Fruits and Vegetables Campaign’ to inculcate the habit of daily consumption of fruits and vegetables for a balanced diet and good health.

It was launched in conjunction with the Malaysian Agriculture, Horticulture and Agrotourism (MAHA) 2016 show held at the Malaysia Agro Exposition Park, Serdang (MAEPS).

“This is due to the Malaysian eating habits of not placing high importance on the intake of fruits and vegetables, and they are more comfortable with eating cholesterol-laden and high-calorie food while ignoring the Malaysia Diet Guidelines.

“Our country is faced with a health issue due to the unhealthy lifestyle,” he said after launching the campaign together with Agriculture and Agro-industry Minister Datuk Seri Ahmad Shabery Cheek.

Dr Subramaniam said that basically, many diseases stemmed from the malfunctioning of cells caused by the lack of nutrition like vitamins and minerals.

He noted that diabetes afflicted 17.5 per cent of Malaysians, high blood pressure (30 per cent), high cholesterol levels (47 per cent), obesity (17 per  cent) and problem of overweight (over 40 per cent).

“The campaign launched today is apt as the message that needs to be sent to the public is ‘QuarterQuarterHalf’ which is about the healthy plate concept, that is when taking food, ensure that a quarter of the meal is made of grains like rice.

“The other quarter should comprise proteins such as meat and half made up of fruits and vegetables. If we can follow this formula, the eating habit of Malaysians will change for the better and they will be healthy,” he said.

Earlier, Ahmad Shabery received a courtesy call from Hungarian Minister of State, Andrea Gulyas at a slope area known as D’Lereng at the MAEPS, with their one-hour discussion focusing on efforts to strengthen bilateral cooperation in the agriculture and veterinary fields. — Bernama