Sunday, October 2
You are at:Home»News»Sarawak»Village expansion the answer to high demand for affordable housing — Abg Johari 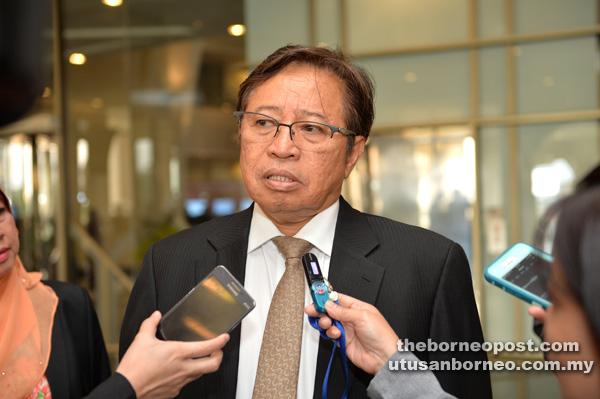 KUCHING: Some 60,000 applicants are waiting for public and affordable housing, particularly in the major towns of Sarawak.

“Most of the applications are for affordable housing mainly in Kuching, Miri and Bintulu while there is only a small number in Sibu,” he said.

“There are already demand for a more organised modern village especially in aspects of infrastructure as well as facilities and amenities. So we are looking into that direction,” Abang Johari, who is also the Minister of Housing and Urbanisation, told reporters after officiating at a ceremony to hand over boats to Kampung Segedup in Batu Kawah here yesterday.

Kampung Segedup and Kampung Maong, both in Batu Kawah area, he added, were among villages that had been identified for the expansion programme.

Well aware that the number of applicants would continue to grow, he pointed out that it would take quite some time to address this housing issue as well as the problems pertaining to slums and squatters.

“Urban migration and marriage are factors contributing to population growth and so demand for more houses will grow as well. We need to find a more sustainable way to address this problem,” he said.

“That’s why I have introduced a new policy and guidelines on affordable housing at the DUN sitting which is intended to increase the supply of affordable housing towards bridging the demand and supply gap and cater for the housing need of the lower income group and also the middle income segment,” he added.

As for difficulties in obtaining loan from banks, he said the ministry would set up a financial institution called Mutiara Mortgage to help solve financing problems faced by many applicants.

“For instance in Sungai Rait, Miri, we have offered 400 units of houses but half of the applicants have failed to get loans approved,” he disclosed.

“As such with Mutiara Mortgage, we try to find a new way to help applicants like through rental basis or others,” he added.

Abang Johari assured that he and Chief Minister Datuk Patinggi Tan Sri Adenan Satem would find means and ways to expand the city to accommodate and provide for the growing population in the state, especially families who have migrated to the city to start a living.