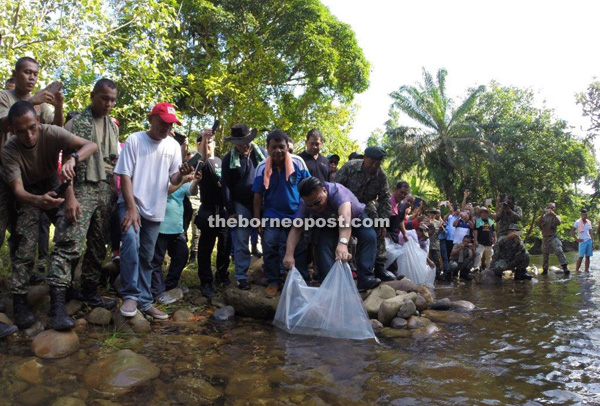 Miro, accompanied by volunteers, releasing the fish fry into the river.

KUCHING: UCSI University Sarawak in collaboration with MyCenTHE carried out a gotong-royong activity in Kampung Tringgus recently as a means to promote the hospitality and tourism industries through education.

The gotong-royong, which was supported by Kampung Tringgus Safety and Development Committee, involved 36 students and staff of UCSI University Sarawak, as well as representatives and volunteers.

“UCSI University Sarawak has been collaborating with MyCenTHE since 2011, when it was appointed as the tourism and hospitality cluster leader,” he said in a publicity release.

Serembu assemblyman Miro Simuh officiated at the event by releasing Semah and Kemah fish fries into the Pedea River and cleaning up of the surrounding.

The purpose of releasing the fish fries was to further enhance the fish population while creating opportunities for fish farming and recreational fishing which are a vibrant tourist attraction.

All the volunteers worked cheerfully as they scoured the riverbanks, house compounds, fields and village roads for rubbish, filling numerous large black rubbish bags by the end of the day.

The representatives and volunteers were then treated to a delicious lunch, prepared by the Kampung Tringgus residents.

UCSI University Sarawak chief operating officer (COO) Mukvinder Kaur Sandhu emphasised that the event was significant because it allowed students of the university to become aware of the value of rural places like Kampung Tringgus.

“They are tiny treasures of Kuching and there is a need to conserve these places through programmes such as this one.  Students not only attain a sense of community but also engage with the local community in preserving our natural habitat,” he said.

Impressed with the enthusiasm of the volunteers, villagers of Kampung Tringgus were equally motivated and excited that the village was being lauded as a promising tour destination because of its many attractions such as the river and waterfalls, homestays, fruit orchards and handicrafts.

After working hard and sweating under the sun, they were rewarded with a barbeque picnic at one of the homestays, followed by swimming in the nearby river.

As part of the curriculum, Sandhu revealed that students were given the opportunity to take part in community-based activities to grasp the concept of homestay.

“Without a doubt Kampung Tringgus is a lovely village offering beautiful natural views and activities, which are certainly sought-after by tourists.

“We look forward to working with the leaders in promoting this village as a new tourist destination through our eco-tourism projects,” he said.

Meanwhile, registration for January 2017 intake is now in progress.

Students who are interested in registering for the programmes are reminded to bring along their academic transcripts or result slip for enrolment.