Wednesday, January 26
You are at:Home»Sports»Shuttlers from 17 nations set for Malaysia Masters 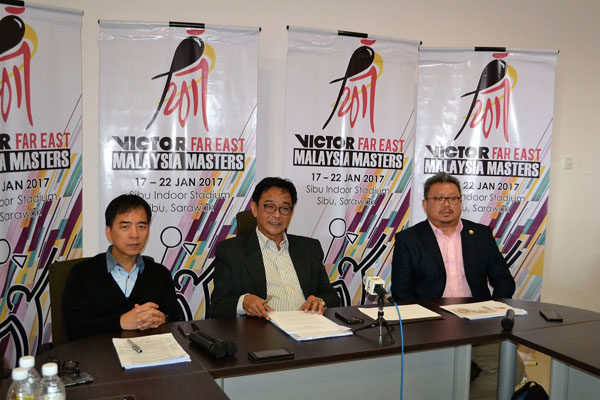 Karim (centre) flanked by Hii (left) and Chew at a press conference.

SIBU: Shuttlers from 17 countries will be taking part in the Victor Far East Malaysia Masters Badminton Championship 2017, to be held at the Sibu Indoor Stadium here from Jan 17 to 22.

He added that the state was proud to host the prestigious event.

“It is organised by Badminton Association of Malaysia (BAM) and is part of the Badminton World Federation (BWF) Grand World Prix Series,” he told a press conference yesterday.

Karim said the Visit Sibu Year 2017 programme would receive a major boost as the badminton event is expected to attract local and foreign fans to Sibu.

The last three days of the championship would be broadcast live on Astro, he added.

Season-tickets are priced at RM80.

“Tickets will go on sale in the first week of January,” Karim said.