Friday, August 14
You are at:Home»News»Sarawak»Christmas duck capers on Seduan River 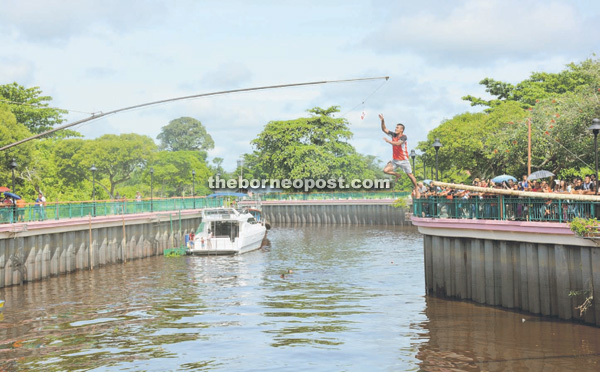 A contender leaps high into the air to grab the red packet dangled on a pole, before plunging hard into Seduan River. 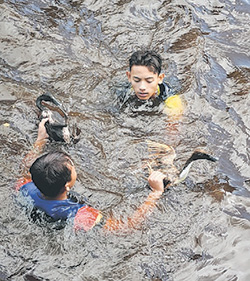 Contenders with their prized catches.

SIBU: It was pandemonium on Seduan River at Sungai Merah bazaar on Christmas morning as dozens of revellers plunged into the river for a duck-catching competition.

One hundred ducks were thrown into the river, upping the ante for those who tried their luck.

The usually quiet Seduan River was a bustle of activity as contenders tried to outswim each other to catch the ducks.

Among them were Melajin Jugok and Albert Andin, who had a field day with their good catches.

“Catching the ducks was certainly no walk in the park, but I am very happy with my catch today (Sunday),” said the stoutly built Melajin.

His sentiment was shared by Albert, who said with the ducks swimming in all directions, one had to focus on the target or end up empty-handed.

Following this curtain raiser, the spectators’ excitement was kept up with electrifying, high-flying leaps of faith in the next event.

Contestants had to walk across a slippery 12-metre-long wooden pole suspended some 20 feet in the air above Seduan River before leaping to grab the ‘ang pow’ (red packets) dangling from another pole on the other side.

The high-octane event has become a Christmas tradition of sorts for the township as folk from far and near gather to witness the annual nail-biting event at Wong Nai Siong Historical Corridor in Sungai Merah bazaar.

Twenty red packets were up for grabs that day, with many people trying their luck.

The contenders, mostly clad in shorts, walked along the narrow and slippery wooden pole towards their target.

Many lost their balance halfway before they could reach the tip of the pole and fell into the river.

It was not until 40 minutes later after this competition began that someone finally managed to grab the first red packet, bringing the crowd to their feet as they cheered enthusiastically with thunderous applause. 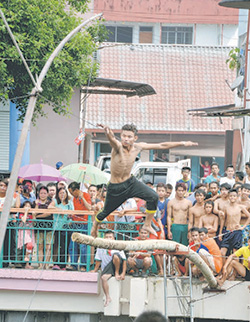 A contender making the leap of faith.

The Christmas Day event caught the attention of passing motorists with many slowinh down to catch a glimpse of what was happening along the Seduan River.

Curious passengers in a chartered bus were spotted looking through the vehicle’s windows to check out the activity.

Spectators started congregating at the Wong Nai Siong Historical Corridor as early as 8.30am even though the event was only scheduled to start at 10am.

Meanwhile, the event is the brainchild of local businessman Chung Ngiok Kwong, 71, who said its key objective was to enliven the Yuletide celebrations here.

He added that he organised and sponsored the event every year.

Volunteers dressed as Santa Claus and Santarina distributed the mini baked egg cakes to members of the public. 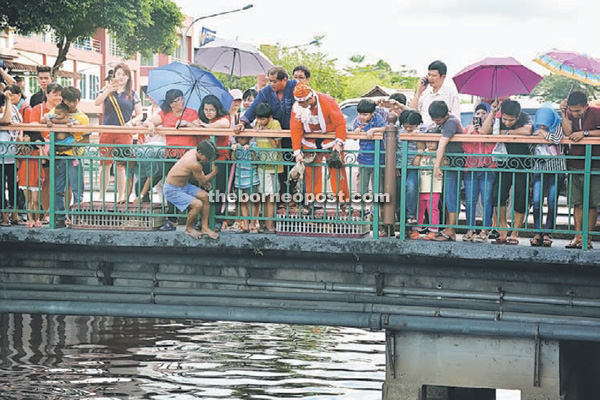 Santa Claus get ready to throw a duck into Seduan River as a contender gears up for the jump.