Thursday, October 21
You are at:Home»News»Nation»Bus passengers can file complaints directly to SPAD 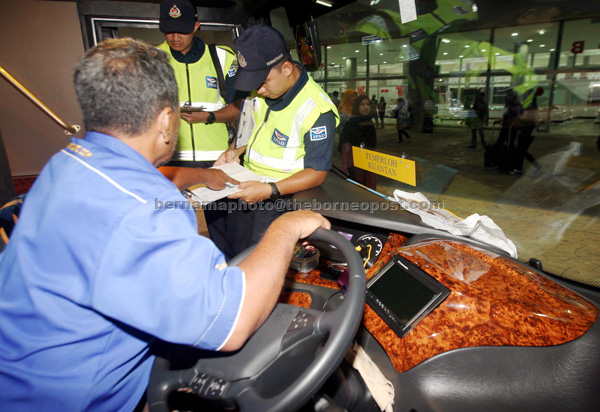 KUANTAN: The Land Public Transport commission (SPAD) encourages express bus passengers to address complaints directly to it when the drivers commit offences which can be detrimental to their safety.

“The passengers must provide all the details, pertaining to the 4 Ws (what, when, where and why) and 1 H (how),” he said to reporters after observing a special operation against express buses in view of the Christmas and New Year holidays at the Kuantan Sentral Terminal here on Wednesday night.

Che Hasni gave the assurance that SPAD would act immediately by contacting the operator of the express bus said to be at fault.

He also reminded all express bus drivers to give priority to the safety of passengers and other road users. He said SPAD had noted the particulars of the express bus driver who had used a handphone and smoked while driving as portrayed in a video clip that went viral on social media.

“Enforcement officers have taken down the particulars of the company director and complainant. The investigation papers have been handed over to the Attorney-General’s Chambers for subsequent action,” he said.

Che Hasni said SPAD would also conduct a special audit on express buses found to have been involved in many offences, but declined to elaborate. — Bernama