Sunday, November 27
You are at:Home»News»Nation»Rohingya refugees in Malaysia remain stateless 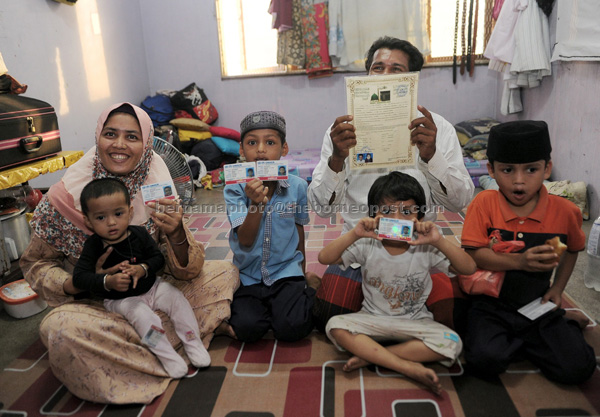 Aminah Asadullah (left), 38, with her husband and children showing their UNHCR card at the Rohingya settlement in Pasar Besar Selayang. — Bernama photo

KUALA LUMPUR: Like any other Rohingya refugee, Zaria (not her real name) came to Malaysia with her children and husband to build a new life and escape years of oppression in Myanmar’s Rakhine state.

Sheltered at a Rohingya settlement in Selayang, Zaria, who has no official personal identification, had been turned down after she tried to give birth at a local hospital because she lacked proper documentation.

Speaking to Bernama using an alias for her safety, Zaria said she delivered her third child at an old house with the help of a ‘doctor’ and ‘midwife’ among the refugees and assisted by locals.

“I had no choice. I would rather deliver my child here than continue to suffer in my motherland,” she said through a translator during a meeting recently.

Zaria’s story is just one of thousands involving the Rohingya in Malaysia, a country where they seek shelter and a way to continue with life.

The Rohingyas who are generally Muslims are a minority group among the 135 ethnic groups in Myanmar, representing 1.33 million of the country’s population.

The group have lived in western Myanmar’s conflict-ridden Rakhine province for hundreds of years, but are still regarded as illegal immigrants and denied citizenship by the Myanmar government.

Large-scale ethnic cleansing and persecution have forced 1.5 million Rohingyas to flee their homes since Myanmar, formerly known as Burma’s, independence in 1948.

The largest group of the stateless people in Myanmar are seen as non-citizens and driven out of their country into neighbouring countries including Malaysia. If they are to remain, they believe they will die mercilessly without even a grave in their own country.

Hence many solicit the help of syndicates to find a way out of the country.

Another choice would be to brave a ride on a refugee boat heading to another country for asylum, risking being stranded at sea without food, water and basic needs for long periods of time. Some do not make it alive.

What is even more disheartening is that, apart from the registered number, there are thousand more reportedly scattered around Malaysia, living on fake UNHCR cards issued by syndicates.

Even with cards and documentation, these refugees are not allowed to go to school, work, drive and such, and can be arrested should they flout the prerequisites set by the authorities.

Rohingya refugee Rehman had planned to marry the woman of his choice, but his application was rejected by a local marriage official due to lack of documentation and ended up opting for an aleternative method to get hitched.

“I was speechless when they told me I had to prepare all kinds of documents eventhough in Islam, we are encouraged to make things easy. Luckily, I am now married with the help of an Ustaz,” he said.

Eight-year-old Feqah hopes to continue schooling at a school in Klang after they fled Rakhine, but her chances do not look good despite various applications and requests made to the United Nations International Children’s Emergency Fund (Unicef).

“I cannot study in a proper school. I would love to study like other children so that I can help my family when I’m older,” she said.

This is contrary to Muhamed’s case, whereby he no longer wants to study but works illegally at a car wash outlet in Ipoh that brings him RM20 a day.

“What can I do? I live here and need to earn an income despite not having documents. I am not committing crimes, I’m working for a living,” said Muhamed who often goes into hiding to avoid arrest by authorities.

According to Zafar Ahmad, UNHCR is also responsible for dealing with Immigration authorities to get access for the release of detained Rohingyas. Unfortunately, the process takes a long time and people suffer a lot.

Any Rohingya refugee who comes to Malaysia with an old UNHCR card needs to get it renewed or replaced when it expires.

Muharam, a refugee who has resided here for almost five years, said efforts to renew his UNHCR card has been futile due to bureaucracy and tight screening.

Erfah, another refugee, has made several attempts to apply for a UNHCR card to avoid arrest, but card syndicates have prevented her from getting identification documents.

She revealed that she has met individuals who allegedly worked at the UNHCR office and claimed to be able to help her obtain a card, but for a sum of money.

“After several official letters  to the UNHCR failed to get a positive response except for ‘in process’ status, I had to find another way by paying between RM50 and RM200. However, I have yet to receive anything until now,” she added.

Zafar Ahmad believes a database could help solve the problem.

“There are over 60,000 Rohingya who remain undocumented in Malaysia but deserve Refugee status. But no party has any particular database. Therefore, we are trying to help the government and other diplomatic missions by creating a database through provision of Rohingya identity card to members of MERHROM,” he said.

Zafar said as many Rohingyas remain unemployed, and to survive they face numerous challenges as they are not considered legal citizens under the Malaysian Immigration Law, thus, there is no specific hospital or clinic for the Rohingya.

However, for a popular figure in the Rohingya Malaysia community, Rafik Ismail, who is more known as Ustaz Rafik, 41, there is more to be done besides creating a database to eradicate the syndicates taking advantage of the Rohingyas.

“This database will require funds from our community. How can we give money if there are those among us with no identification, unemployed and no money to pay for the basic necessities?” he asked.

Ustaz Rafik, who has been here for almost 30 years, said the authorities could ease the red tape and regulations for asylum application and implement a programme to send them directly to a third country so that they do not remain stateless in Malaysia.

The Rohingya ethnic minority is well known around the world for the suffering they have been enduring and the cruelty afflicted on them in Myanmar.

According to international refugee laws, a second country like Malaysia needs to provide temporary shelter like done in Turkey and Britain. However, this is not being done in Malaysia.

Humanitarian activist Norul Hazreen Muhammad, a Malaysian, opined that by having temporary shelters at schools or business premises, the refugees will remain in one community and not disturb the outside community.

“If Malaysia does not accept them, what’s wrong with providing a designated area for them to stay temporarily while waiting to be sent to a third country.

“In this area the refugees can send their children to school, work and avoid crimes like what is happening now due to their hardships,” said the activist who works with an international humanitarian body.

Norul Hazreen also proposed that the conditions set for the UNHCR cards be extended beyond identification where the cardholders could also seek employment while living in Malaysia.

She said Rohingyas should be treated like the other refugees from Pakistan and Syria because in the end Malaysia would be judged by the world in the international refugee and humanitarian index.

Oppression and discrimination towards this ethnic group continues in their own country, what choice do these refugees have except to live in Malaysia? — Bernama