Sunday, March 7
You are at:Home»Business»Sebauh a gem in the making 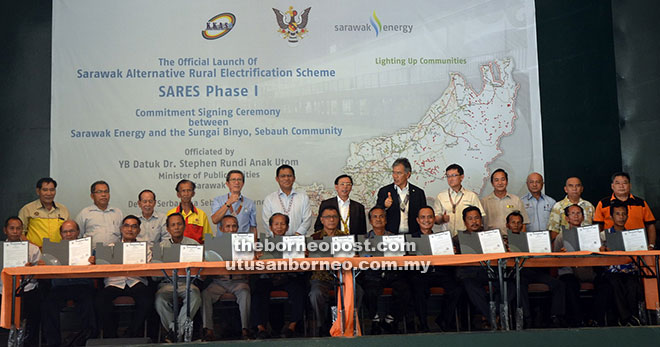 Rundi witnessing the official launch of Sarawak Alternative Rural Electrification Scheme commitment signing ceremony between Sarawak energy and the 13 village heads. The project costs around RM10 million and is expected to be completed by end of the year.

BINTULU: With a population of over 20,000 people, Sebauh district has the potential to be further developed in the future.

As part of the area under Sarawak Corridor of Renewable Energy (SCORE), Sebauh used to be a sub-district under the Bintulu division but it was elevated to a district on August 1 last year.

Sebauh’s district officer Desmond Douglas Jerukan said being a full district, there was now a crucial need to have continuous improvements and upgradings in various aspects.

Sebauh’s development, he said, was attuned to the Sarawak Socio-Economic Transformation Plan (SETP) which places more emphasis on rural areas.

According to him, SETP is a ‘catch up plan’  for Sarawak in its efforts to be a developed and high income state. It was tabled by the Chief Minister Tan Sri Adenan Satem in Sarawak State Legislative Assembly (DUN) last year.

Desmond expected a significant increase of population in Sebauh by 2020 on the back of an increase in employment within various industrial sectors such as plantations and agriculture, manufacturing, timber and services.

“As a new district, several development plans have been outlined for Sebauh to become a modern and progressive district,” he told The Borneo Post in a recent interview.

However, he highlighted that there is a lack of manpower necessary to fuel this progression, in particular its administration as the Sebauh District Office which currently only holds nine staff.

“The proposed staff for Sebauh District Office is 19 people, and 14 staff are urgently needed,” said Desmond.

In addition, new state agencies need to be set up in Sebauh including the proposed Forest Department, Public Work Department (Water Supply), Welfare Department, Land and Survey Department and Department of Irrigation and Drainage.

Other federal government agencies needed in the district include Fire and Rescue Department, Road Transport Department, a police station, a polyclinic and Information Department.

He believed all these agencies were instrumental for every district to be highly effect in providing high quality services for the communities.

One of the main administrative requirements is to upgrade the Sebauh Disrict Office building so that all these agencies could be centralised in a single location.

“A new administration centre is being planned at the State Planning Authority level to designate the site,” he added.

Economically, the Sebauh district enjoys the spillover from the SCORE development projects.

“One of the important projects is Integrated Waste Management System (IWMS) proposed at Maskat and this will indirectly create brisk business and employment opportunities for the locals,” he said.

Aside from that, an affordable housing and business support centre was also on the drawing board for Sebauh to cater to the needs of the local population and at the same time this could reduce the rural-urban migration.

The palm oil and wood based industries are also two very important sectors in Sebauh.

For the record, palm oil and its related industries are the main economic resource for the district with more than seven palm oil

Desmond added that there were three palm oil factories in the district and there is also a plan to create wood-based industrial area in Sebungan and Tubau – making Sebauh one of the key sub-region centres in Bintulu.

One of the economic sectors yet to be fully explored in Sebauh is the service sector, particularly those related to tourism activities.

Among interesting places suitable for tourist promotions include Penyilam National Park, Natok Kon floating temple, orchard and several longhouses which still practise and preserve the tradition and culture of the local Iban, Punan and Penan communities.

“To support this industry, a craft centre and tourism agencies have been proposed to be set up here,” he said.

Meanwhile, infrastructural development is expected to have a positive impact on the political stability in Bintulu, in general.

Desmond stressed on the importance of having proper development plans for Sebauh in order to find the right balance of the socio-economy of the people by creating more business opportunities.

“Proper development plans for Pekan Sebauh also can make Sebauh as the meeting centre for local people and also those from outside,” he added.

Non-governmental organisations like Pekan Sebauh Social Committee, Community Bestari 1Malaysia and People’s Volunteer Corps (Rela) cooperate with each other and maintain a good relationship between the people of Sebauh and Sebauh Community Leaders Committee.

To monitor the progress in Sebauh, he said a Sebauh Visionary Team was formed by Public Utilities Minister Datuk Sri Dr Stephen Rundi Utom which consists of community leaders and heads of government department.

While Sebauh is still experiencing steady economic growth, Desmond believed there could still be issues on the ground such as the level of readiness by the locals to accept the changes in terms of projects and development programmes.

“Community leaders should play an effective role to explain about the government’s development policies so that the people will understand why such projects need to be implemented,” he said.

When asked of his dream for the future, Desmond hoped all development projects could be implemented efficiently by the respective agencies.

“As a new district which still has fewer modern infrastructures, the settlement plan including the construction of buildings and roads can be carried out properly.

“Town development or urbanisation process especially in Pekan Sebauh, Pekan Labang, Pandan and Tubau can be planned smoothly to meet the social needs to be more sustainable and environmental friendly.

“It is my hope that Sebauh will enjoy continuous growth in line with its status as a new district. The people here are united and friendly and even I was not a local man I was welcomed and treated as family by the local community,” he concluded.