Wednesday, August 17
You are at:Home»News»Sarawak»‘Irresponsible contractors’ to blame 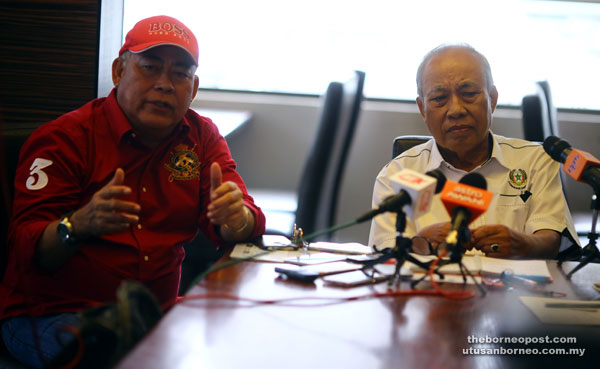 KUCHING: The new contractor for supplying diesel to 369 rural schools in Sarawak has blamed some “irresponsible contractors” for the diesel shortage that caused some 30 rural schools to be unable to use their generators on the first day of school recently.

“Should the appointed outgoing contractors sincerely abide by the Education Ministry’s directive, the fuel made available to the schools can easily last for between 10 and 15 days after the termination of their contracts in December last year,” he said in a press conference here yesterday.

Besides supplying diesel to the rural schools in the state, Jepak Holdings Sdn Bhd is also tasked with installing solar hybrid system as well as the maintenance of generator sets in these 369 rural schools for a period of three years from Jan 1, this year, with a provision for two years’ extension.

Abang Nawawi clarified that the schools affected by shortage of diesel were only 10 per cent of the 369 rural schools, adding that his company had taken proactive action even before the commencement of their contract to assist the Education Ministry to remedy the issue quickly.

“We have delivered diesel to all the schools and the generator sets are up and running except for SK Kabong because the generator set is spoilt which is beyond our control. We are in the process of replacing it.”

In noting that the fuel consumption of generator sets also depended on their capacity, he said on average, a school needed about 5,000 litres of diesel per month. However, there were 10 bigger schools that required 15,000 litres per month.

“We will try to deliver as much as possible each time. Sometimes due to logistics problems, we will have to deliver twice per month. If we send once a month, we will deliver approximately 5,000 litres and 2,500 litres if we deliver twice in a month.”

In order to ensure that the incidents of blackout could be prevented, the company had stationed its own operators on the ground to ensure that generator sets are in good condition and there is no shortage of diesel in the schools.

He mentioned that Jepak Holdings Sdn Bhd was one of the 31 contractors supplying diesel and maintaining generator sets for 14 schools under Baram 2 zone for 2015 to 2016 as well as schools in Mukah and Dalat over the past two years.

“There was no problem with the schools that we served. In fact, when the problem was reported in the media, we were already on the site to help the affected schools.”

With its background as a 100 per cent Bumiputera-owned company and over 30 years experience in the oil and gas industry, the company would be able to perform according to the contract.

Besides that, Abang Nawawi said the company had the G7 licence from Construction Industry Development Board (CIDB) and Class A licence from Contractor Service Centre (PKK).

However, Saidi did not indicate clearly when asked if the contract was awarded through open tender. Instead, he asked the reporters to refer the matter to the Education Ministry.

On the solar hybrid system that would be built in the rural schools, he said the installation work would only take a month and that the company would be utilising the latest technology from Germany and Italy.

“Work will start in February and our in-house consultants will start surveying work and conduct site preparations work. We have the work schedule and have to complete the total project in 36 months with the provision for another two years’ extension due to rainy season.”

On another note, Abang Nawawi said it was not fair for a political leader from Miri to blame Putrajaya for the shortage of diesel supply to rural schools.

“I strongly deny that it was the fault of Putrajaya in the delay of diesel supply to the schools. The Ministry of Education had written a letter dated Dec 16, 2016 which all these contractors received just to do what I have been telling you.