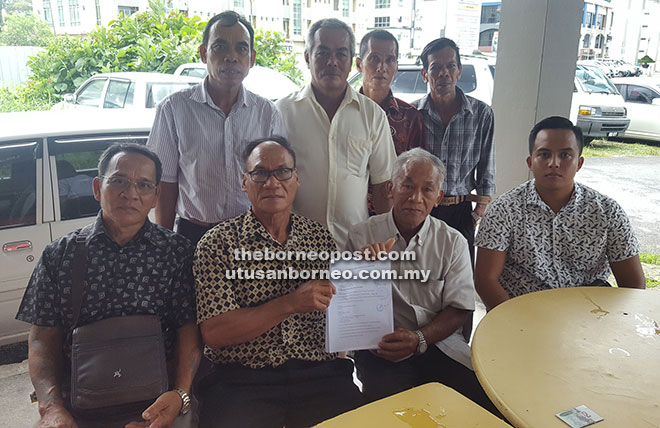 Asoi and Jampong (seated, second left and second right, respectively) holding together a copy of the petition submitted to the CMO. With them are several villagers from the two longhouses.

KUCHING: Residents of two longhouses at Pantu near Sri Aman claim that a certain oil palm plantation company has been illegally running its operations on their Native Customary Rights (NCR) land.

Jampong Tibu and Asoi Agoh – submitted a petition and letter against the said company to the Chief Minister’s Office (CMO) at Wisma Bapa Malaysia in Petra Jaya near here yesterday.

The headman said the company had illegally converted their land into an oil palm plantation without their permission.

According Asoi, they first noticed the presence of the company in their areas in 2009 and had many a time sought to meet its representatives since then.

“Early this year, we went to see Land and Survey (Department) to enquire about the company and were told that it actually had provisional leases to operate on a number of plots of our NCR land. The thing is nobody from the company had ever met us to discuss or talk about any negotiation.

peacefully and also to seek for negotiations, seeing that the company are running their plantation on our land at Sungai Tatai, Munggu Penyau, Munggu Temilong, Sungai Bundong and Sungai Buloh.

“The problem now is that those from the company have been refusing to see the villagers. It is as if having the provisional leases permits them to simply trespass our domain,” he said.

Asoi also claimed when they did get to meet somebody from the company, the latter would inform them that a certain ‘Datuk’ was not around and thus, unable to negotiate anything.

“This has been going on since 2009. It appears that the company is doing all it can to avoid contact with the villagers,” he stressed.

“The company’s activities have been affecting our NCR land and depriving us of our livelihood,” he told reporters here yesterday.

In his remarks, Jampong hoped that there would be a way for the company to engage the villagers and negotiate with them appropriately.

“There is another different oil palm plantation company that has been operating on our land for quite some time now. They went to see us and offered to negotiate with us on dividend-sharing from the profits. This should have been the proper way, rather than taking the NCR land away without even meeting us.

“The submission of the petition and letter against the company to the CMO is our last resort. It seems that our plight has fallen on deaf ears – we just cannot take it anymore,” said Jampong, adding that copies of the documents had also been forwarded to the deputy chief ministers and the offices of their elected representative.

“It is still not too late but for now, we appeal to Chief Minister Datuk Patinggi Tan Sri Adenan Satem, his deputies and other top Sarawak leaders to listen to our plight,” he said.