Thursday, February 2
You are at:Home»News»Sabah»Assistance to reach Kota Marudu flood victims soon – Max
For the freshest news, join The Borneo Post's Telegram Channel and The Borneo Post on Newswav. 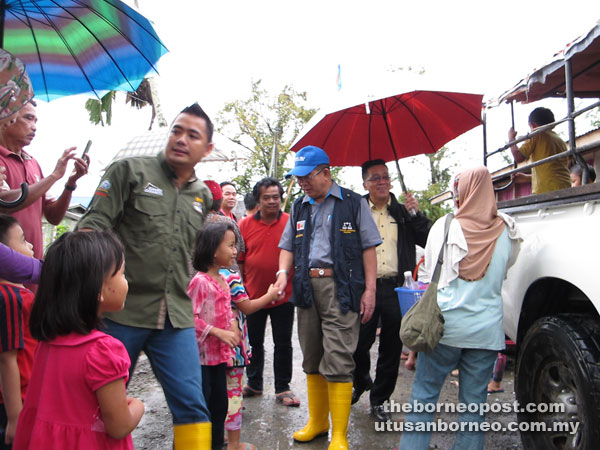 Energy, Green Technology and Water Minister Datuk Seri Dr Maximus Ongkili mingled with the flood victims at one of the temporary evacuation centres in Kota Marudu.

KOTA MARUDU: Work is underway to ensure the basic needs of flood victims here are met.

Energy, Green Technology and Water Minister Datuk Seri Dr Maximus Ongkili, in stressing this, said food and drinks as well as cooking utensils have been distributed to victims who were temporarily sheltered at 11 evacuation centres in the district.

Two evacuation centres have since been closed.

He said the assistance were supplied through the Kota Marudu Member of Parliament’s office and the Welfare Department, with the coordination of the District Department’s Natural Disaster Committee.

Persistent rain in the last 48 hours forced local authorities here to activate their temporary evacuation centres to shelter 2,880 flood victims since Wednesday. No casualty has been reported to date.

According to Ongkili, the unusual heavy downpour in the upstream of the Kanarom River, Marak-Parak and foot of Mount Kinabalu have been identified as the main cause of the flood.

“We welcome donations in forms of food, drinks and essential items, including baby products like milk powder and diapers, from non-governmental organisations, private sector and individuals to help ease the flood victims’ burden.

“All assistance must be channelled through the District Office,” said Ongkili, who is also the Member of Parliament here and Parti Bersatu Sabah acting President, adding that at least 19 villages were affected by the flood.

At least seven roads, including Jalan Kg Beliajung, Kg Longob, Kg Damai, Kg Taritipan and Kg Tandek and the Jalan Popol and Langkon roundabouts, were also affected by the flood but the water levels have subsided and is now passable by vehicles.

The flood also forced 24 substations to be shut down on Wednesday and all of them have since been activated. The rising water level also caused 22 schools to be temporary closed, with one – Sekolah Kebangsaan Taritipan – converted into a temporary shelter centre to house flood victims from nearby villages.

“We hope the weather will improve, but in the meantime, we will continue to monitor the water condition,” he said, while urging all community leaders to cooperate and assist in managing the flood situation to alleviate the people’s sufferings.

Minister in the Prime Minister’s Department Datuk Seri Shahidan Kassim, who oversees the National Security Council, is expected to travel here for field inspection and to deliver assistance.