Sunday, August 14
You are at:Home»News»Sarawak»Father and son arrested for making home-made guns 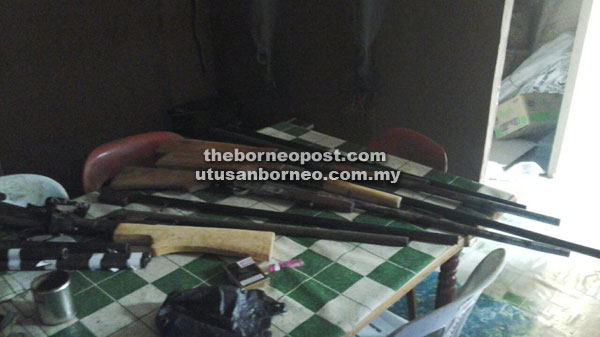 These are the guns seized from the two suspects.

BINTULU: A 72-year-old man and his 41-year-old son from a longhouse in Sg Senggam, Sebauh were arrested by the police for allegedly making home-made guns.

They and the home-made guns were picked up around 5pm Thursday after police received a tip-off about the illegal activity. The raiding party also confiscated various apparatus used for making the guns.

Police chief here Supt Zailanni Amit said the case was being investigated under Section 8 (a) of the Firearms Act, 1960. They could be sentenced up to seven years’ jail or fined RM10,000 or both upon conviction. Based on the interrogation, Zailanni said the guns were used for hunting and a few were meant for sale.

“The suspects have been making home-made guns for more than a year and sell them between RM500 and RM600 each. Four units have so far been sold.

“We are taking this action because several shooting cases (hunting for wildlife in the jungle) were reported in the past. Those who have bought the guns, please return them to the police.”

On a related subject, he urged those people wanting to hold firearms, for hunting purposes, to get the necessary licence.

“For the record, the police have three reported cases of accidental shooting while hunting last year which resulted in one death and several victims with serious injuries,” he said.