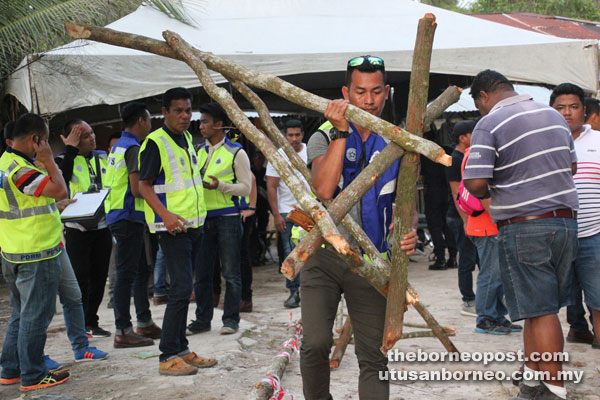 The police dismantle the boom gate.

SIBU: Several longhouse residents at Rantau Panjang near here used logs to block a road running through a 12-acre piece of land they claim is their NCR land on Thursday morning.

The police went there about 6pm to remove the ‘roadblock’ in the presence of Sibu deputy police chief Superintendent Martin Koo and Sibu CID head DSP Yeoh Chun Shyan.

It is believed that the police had earlier advised the residents to dismantle the blockade but to no avail.

Sibu police chief ACP Saiful Bahri in confirming the incident, said his men were monitoring the situation. After the police removed the blockade Toni Nyanau, 36, a longhouse resident lodged a police report about 7pm over the incident.

Meanwhile, it is said that the dispute over of land encroachment had been on since 1998, with a number of police reports lodged against those the local residents claim were trespassers.

Land owners also claimed that a road had been illegally constructed along the boundary of their land, and that five companies had daily access to their plantations in the vicinity.