Sunday, June 7
You are at:Home»News»Sarawak»Miri Marriott Resort & Spa ready for another exciting year 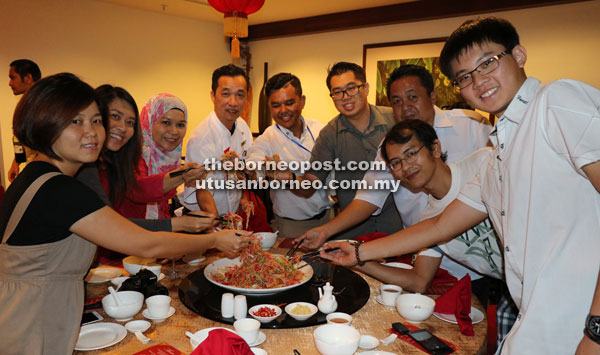 MIRI: Miri Marriott Resort & Spa is gearing up for another exciting year 2017 after achieving many successes last year like winning the Best Family and Resort Award at Hospitality Asia Platinum Awards Regional Series 2015 – 2017.

Its general manager Marc Cosyns said among the steps taken were holding various promotions and initiatives that include engaging the service of an executive sous chef.

“We got Malaysia’s very own renowned chef Khoo Seng Keong who specialises in Chinese dishes to join us as part of our efforts to provide quality services to clients and to promote Malaysian Chinese food,” Cosyns said at a Pre-Chinese New Year dinner and Chinese Food Review on Thursday night.

Cosyns said acquiring the service of Khoo was in line with the state’s focus to attract more tourists from the Pacific region, particularly from China and Taiwan apart from the Chinese community in Miri City.

Chef Khoo, 49, from Kuala Lumpur joined the resort on Jan 9.

During his introduction at the dinner, Khoo disclosed that he began his culinary experience more than 30 years ago in Kuala Lumpur at 18 years of age.

His dedication and style have taken him to several countries in Asia including Indonesia and Brisbane in Australia.

After working for several five-star hotels and restaurants, he joined Miri Marriott to lend his culinary creativity and innovation to the Marriott team.

He is responsible for the success of the hotel’s culinary management and operations as well as its food safety management system.

He showed his versatility when serving guests.  His dishes are of consistent quality whether cooking for a banquet of 3,000 people or for a small gathering of five.

Some of the new signature dishes on the menu are Chicken Consomme with Dry Scallop & Water Chestnut; Two-flavour Prawn Dish combination;

Chef Khoo and his team are not only adept at à la carte menu but exclusive personalised cuisine.