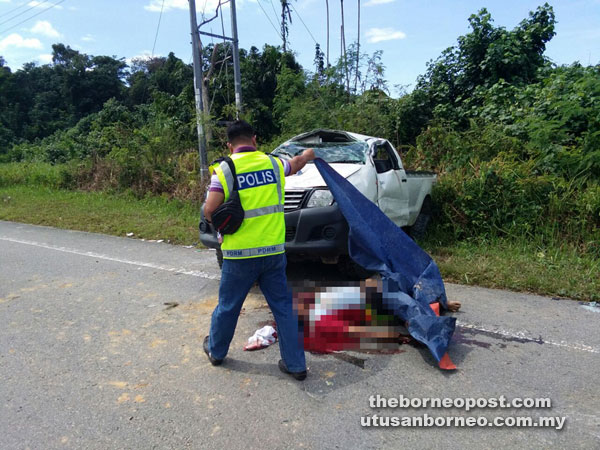 Police personnel covers Imat’s body at the scene of the crash.

MIRI: A man died while four others sustained minor injuries in a collision involving a mobile police vehicle (MPV) and a four-wheel-drive (4WD) near Kampung Beraya Lama’s junction at Miri Coastal Road on Friday morning.

The 4WD passenger Imat Ancha succumbed to head injuries sustained from the impact of the crash. His body was taken to Miri Hospital morgue for a post-mortem.

Three police personnel from the MPV and the driver of the 4WD sustained minor injuries. An ambulance was rushed to the incident upon receiving a call around 11am.

Miri deputy police chief, Supt Stanley Jonathan Ringgit confirmed receiving a report on the incident. Prior to the incident, both vehicles were heading towards Bekenu from Miri. The police personnel were doing routine patrol duty when the crash occurred.

According to preliminary investigation, upon reaching Kampung Beraya Lamak’s junction, the MPV signalled to indicate it was about to enter the junction.

The 4WD following behind had at this moment attempted to overtake, but ended up ramming the MPV which had slowed down. The impact of the collision caused the 4WD to skid off the road.