Wednesday, August 17
You are at:Home»News»Sarawak»SFC foils timber theft in Sibu and Betong 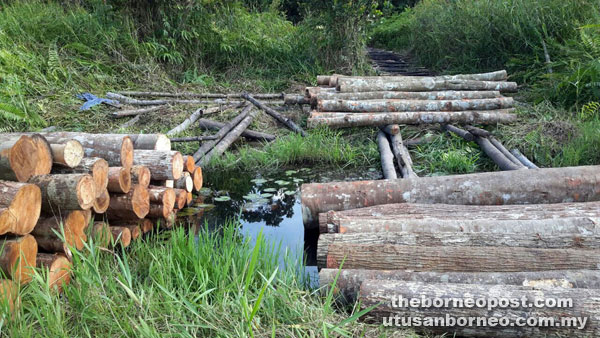 Short logs ready to be taken out at Jalan Pulau Dudong in Sibu.

In a statement issued yesterday, SFC disclosed that in Sibu, staff from SFC’s One-Stop Compliance Centre (OSCC) at Ulu Oya Road found 308 short logs at Jalan Pulau Dudong while patrolling in the area.

The logs were mostly of mixed light hardwood (MLH) species had been felled at a nearby forested area and transported out by means of the ‘kuda-kuda’ rail system. The logs had been detained upon confirmation that no licence had been issued to extract timber in the area.

Meanwhile, in Betong, SFC enforcement team comprising staff from OSCC Betong and Kuching Regional Office raided a site at Jalan Lindong where they seized 328 Keruntum poles and 10 logs of mixed species after being verified to have been illegally felled.

Both cases had been reported to the police and handed over to the relevant authority for further investigation and disposal.