Tuesday, February 7
You are at:Home»News»Sarawak»Association sheds light on suspension of flight
For the freshest news, join The Borneo Post's Telegram Channel and The Borneo Post on Newswav. 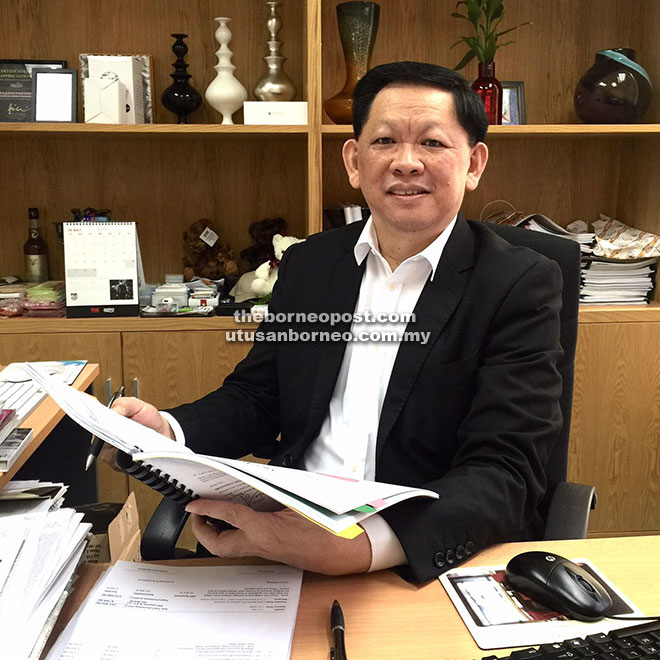 John Teo sharing his opinion with The Borneo Post.

MIRI: The announcement on the suspension of Hong Kong-Kuching route by Hong Kong Airlines on Jan 17 may have shocked and caused much disappointment to many, especially tourism players.

But the truth is, this is just a tip of the iceberg.

Honorary secretary-general of Malaysia Association of Hotels (Sarawak Chapter) John Teo shared his opinion with The Borneo Post on the many problems leading up to the suspension.

“From the feedback I gathered from the travel agencies in Hong Kong, most of the passengers who booked their flight to Kuching are free independent travellers (FIT).”

FIT is defined as an individual or a small group travelling and vacationing with self-booked itinerary using the service of traditional guided tour; and most of the bookings are done online.

“Upon arrival in Kuching, most of them had problem looking for their own transportation as well as finding out where to go from the staff at the hotel they stayed in. The presence of well-trained service staff to assist tourists at places like airports, hotels, etc, is vital to keep tourists coming back.

“I strongly believe that it was the disappointment they got during their trip that resulted in less and less people flying to Kuching from Hong Kong,” Teo opined.

Many months ago, Teo shared, there was talk that Shen Zhen Airlines would fly directly to Miri but up to now there was no explanation why the plans had not materialised.

“I have actually checked with the organisers who came here for the familiarisation trip. The feedback – there is just not enough products for the China people to pay huge bucks just to have their holidays here.

“The brutal truth, they revealed, is that whatever we have over here, they have it in China without having the fuss to pay for the flight tickets,” Teo said, insisting that Sarawak must have new products to offer to potential tourists.

The Petroleum Museum is among the many popular landmarks that reflect the rich history of Miri as a century-old oil town transformed from a fishing village.

“To be honest, the museum has been in a bad shape for such a long time and the locals do not even bother to introduce it to their visitor friends. It has never been professionally taken care of and there is a whole lot of work to do to turn it into an interesting attraction.”

Teo suggests the museum be given back to Shell to be upgraded, and equip it with newer and more equipment.

“Being in the hotel line, it is my job to introduce these places of interests to my clients. However, I’ve always received feedback from tourists that the place is not open, there is no air-conditioning and worse, the place is leaking during heavy rain.”

Recalling a recent meeting chaired by now Chief Minister Datuk Amar Abang Johari Abang Openg in early January, he said the latter had mentioned that any tourism product in Sarawak has to be initiated by the private sector as his ministry (Ministry of Tourism) can only assist in getting these projects approved.

Teo strongly agrees that similar effort could be applied to the Petroleum Museum.

“We do not expect Miri City Council to seek funds to upgrade the Canada Hill, where the museum stands. We need the council to push the local private sector to take up the task, to beautify the whole Canada Hill area so that it looks attractive.”

Miri, said the general manager of a local hotel here, has a lot to offer – particularly its beautiful nature.

“The stretches of beautiful beaches and Luconia Shoals are suitable for nature-loving people to get closer to nature. Many activities could be done at just these places such as strolling by the beach, water activities, diving etc,” he said.

“As usual, no realistic action has been taken on how to lure more foreign tourists to come and experience the beauty of our nature. Perhaps it is about time that the government take a serious view; gathering potential private firms that are keen to assist in developing these places.”

Teo lauded the Ministry of Local Government for having put Bario under the care of Miri City Council.

“It is, in fact, the greatest asset for Miri. The whole of the uphill of Bario can be a good place for farming. Along with its significant produce like Bario rice, pineapples, apples, grapes and durian, turning it into a leisure farm will attract not only foreigners but also the locals.”

Major concerns on facility and services To attract more visitors, one must look at the facilities available, says John Teo.

Sharing the concern of the local community, Teo pointed out that the major problem is none other than transportation.

“Taxi fare is as expensive as the fare in Kuala Lumpur and the bus service is not regular. A taxi ride of just a couple of kilometres costs a minimum of RM15 to RM20. The government wants to get more tourists to boost its economy, but often neglected the basic need of tourists, that is bus service.

“Not to mention the lack of free internet or Wifi, the not so clean drains and unhygienic toilets at eateries, public toilets, these are the facilities that are in dire need of upgrading.”

Assistant Minister for Tourism Datuk Lee Kim Shin had been working closely with Sarawak Tourism Board on promoting Sarawak to the outside world. However, Teo expressed his dissatisfaction that the effort was only concentrated in Kuching rather than whole of Sarawak.

“Please bear in mind that Sarawak is not Kuching only and Kuching does not represent Sarawak. A three-day familiarisation trip in Sarawak is absolute joke as it is not enough for tourists to visit the true face of Sarawak. It is only enough to visit just Kuching,” Teo said in disappointment.

To cover such a huge state like Sarawak, the familiarisation trip should be at least seven to 15 days, he suggested.

The announcement on the suspension of Hong Kong-Kuching flight by Hong Kong Airlines may have shocked and caused much disappointment to many.

Miri has a rich history as the century-old oil town was a fishing village.

Miri City has a lot of offer, particularly its beautiful nature. Picture shows a beautiful sunset as seen from the 17th floor of Meritz Hotel Miri.

A giant Christmas tree at Miri City Fan with the beautiful moon in the background. The giant tree is one of the many seasonal attractions in Miri.

A file picture of a dragon dance performance at the CNY Bazaar, a yearly local attraction that usually takes place a week before Chinese New Year.

The beautiful Tusan beach about an hour and half drive from Miri City. It is one of the many attractive beaches found in Miri.