Tuesday, May 17
You are at:Home»News»Sarawak»Ministry, alumni to jointly promote TVET 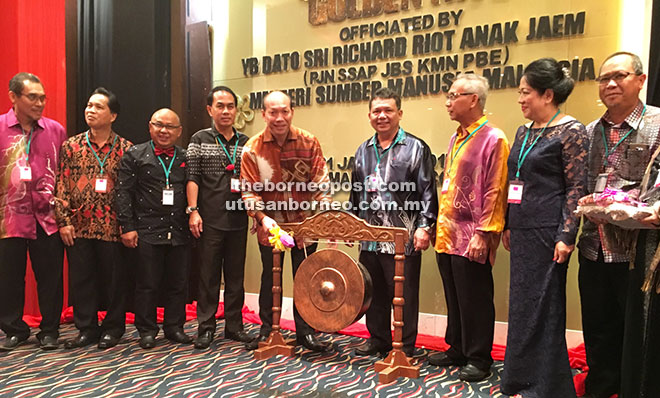 Peter (fifth left) gets ready to hit the gong to launch the alumni association. He is flanked by Joseph (on his left) and Petrus.

KUCHING: The Ministry of Human Resources plans to work together with alumni of vocational schools to increase public awareness of Technical and Vocational Education and Training (TVET).

He pointed out there were many former vocational students now already  successful in professional fields and earning high incomes, who could share their success stories when joining such events.

“This year 2017 has been declared TVET Year. We need to change the perception that TVET is no longer a second class choice for those who pursue further qualification,” he said at the dinner organised by the newly established Kuching Vocational Alumni Association on Saturday night.

Peter came on behalf of Human Resources Minister Datuk Seri Richard Riot Jaem to officiate at the dinner, which gathered former students of Kuching Vocational School in the 1970s.

He also said the minister had indicated readiness to allocate funding for the cooperation with alumni of vocational schools.

He conceded that many parents in the past had looked at TVET as second class education.

“But as you can see from members of our alumni, many of them are successful. When we completed our schooling, jobs waited for us. Some of us pursued higher education up to master’s degree level overseas.

“Some even climbed up the ladder in their careers in the oil and gas industry,” he said.

Among those present that night was a political secretary to the chief minister Petrus Igat, himself a product of Kuching Vocational School.

Previous ArticleLee: State all out using IT to promote tourism industry
Next Article Govt should continue its rural development policies — PKR Baram