Saturday, January 29
You are at:Home»News»Sarawak»One civil servant to 19 people 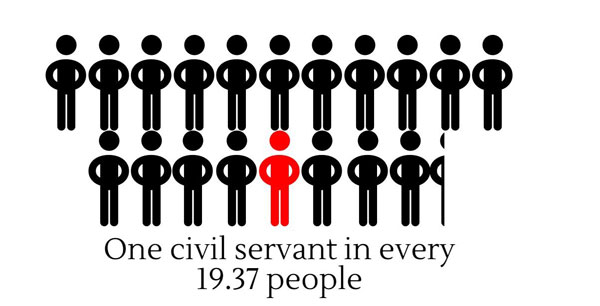 KUCHING: The Malaysian civil service is large relative to the country’s population — making it the highest in the world with one civil servant in every 19.37 people.

“When I first entered the cabinet, the country was facing a variety of dilemmas — floating oil prices led to reduced government revenue, ringgit devaluation, high living costs and political controversies — which have made my work more challenging.

“One of the issues that we have to address is the ever-increasing government operating costs and expenses.

“For example, we have about 1.6 million civil servants, which is the world’s largest proportion of civil service,” Johari told The Oriental Daily on Jan 30.

He said based on the country’s current population of 31 million people, the ratio is one civil servant to 19.37 people.

However, Johari asserted that the government had no plan to reduce the number of civil servants although the remuneration and pensions to the civil servants continued to soar. 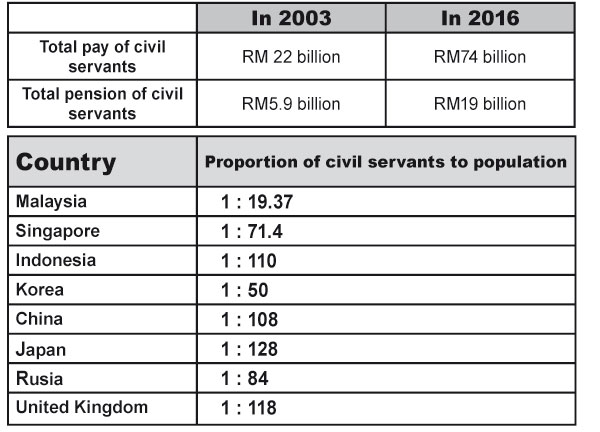 Johari added that in the years to come the number would continue to increase and the government’s income would gradually decline.

“In particular, revenues from the palm oil and natural gas industries, which generated profits of about RM65 billion in 2014, fell sharply to RM30 billion in 2016,” he said.

“We will not reduce our existing civil service. Instead, we should encourage civil servants to undertake more jobs in their respective departments to increase their productivity,” said Johari.

When contacted, Minister in the Prime Minister’s Department Datuk Joseph Entulu Belaun, who has been entrusted to look after the civil service in some sectors, opined that the prime minister had to address the issue as it was of national interest.

“And in the long run, we need investors and the business community to expand our economy. We also need more foreign direct investment (FDI) so that the private sector will become the major employer for the nation in the future,” he said.