Monday, August 15
You are at:Home»News»Sarawak»Just a Croc-branded jerseys but it’s their elusive goal 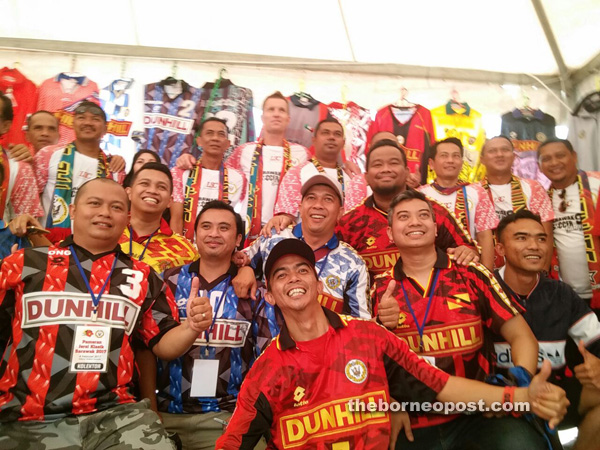 Members of the group together with former Sarawak players in a photocall at the exhibition booth.

KUCHING: It may just be a faded football jersey, but to this circle of aficionados, it’s their elusive goal – a collector’s item.

Known as the ‘Sarawak Jersey Collector’, the group recently held an exhibition outside the Sarawak Stadium, held in conjunction with the Malaysian Super League soccer match between Sarawak and Pahang (Pahang won 1-0).

According to group representative Batika Faisal Lariwoo, the retro jerseys are reminders of a certain period or bygone era when it was worn by players and fans alike.

“In my opinion, this initiative is a great way to tell a story to educate the younger generation on the history of our beloved state football team,” he said.

He added that some 140 jerseys were on display during the exhibition which were pooled by members of the group who are active in a Facebook group as the main platform for interaction.

“The jerseys were acquired from former state football players or their families and even from friends who still kept them in good condition,” said Batika.

“We had former Crocs legends such as Alan Vest who told me the exhibition had him reminiscing his days serving as coach to Sarawak, while former team captain and coach Jalil Ramli said it gave him goosebumps to see all the jerseys lined up alongside,” he added.

Meanwhile, for Ali Baizuri Razali, who resides in Kuala Lumpur, his short trip to Kuching just to be part of the exhibition was all worth it.

“I flew in on the day of the event itself, watched the match and return to Kuala Lumpur the very next day,” said Ali.

“Apart from displaying my collection of Sarawak football team jersey’s, my main motivation was to be with my childhood heroes John Hunter, David Evans and Alan Vest who were present at the event. They were household names during my era,” he added.

Ali said his most precious kit was the 1989 away kit, which was worn by Burhaniza Abu Bakar in the controversial match against Kuala Lumpur which saw Sarawak withdrawing from the Malaysian League.

Ali said he was pleased with the Football Association of Sarawak (FAS) initiative as it gave fans the golden opportunity to rub shoulders with the players and know the Crocs more intimately.

“The exhibition itself is a way to show our appreciation to the team and players, and with sentimental value in this issue, the jerseys tell a 1001 stories,” he said.