Saturday, August 13
You are at:Home»News»Sarawak»Stall owners at old ferry terminal uncertain about their future 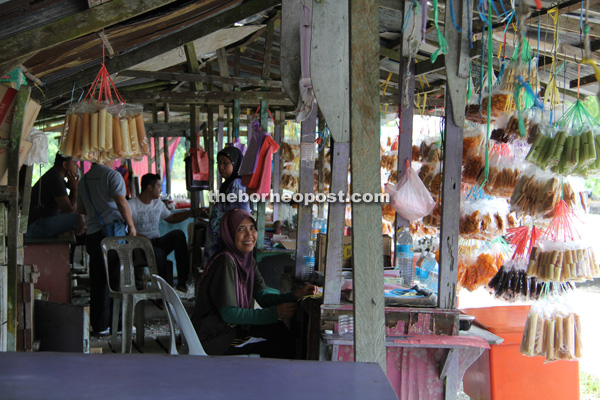 Hajijah (right) and other stall owners wait for customers.

LUNDU: Ten stall owners operating at the old ferry terminal here are now facing an uncertain future following an eviction order which was handed to them sometime last week.

According to one of the stall owners, Hajijah Hasli, the authorities had told them to move out from the area because it would be the site of a second bridge which would be part of the Pan-Borneo Highway.

“We understand that we have to move out but at the same time there is no clear directive as to where we will be relocated. That’s why we are now facing a dilemma as our livelihood for 20 years will be affected if we have to be relocated somewhere else.

“As such, we would like to appeal to the relevant authorities to understand our situation and hope that we can continue to operate here or anywhere near here,” she told The Borneo Post yesterday.

There are a few reasons why the stall operators are refusing to move out of the area. One of them is that they feel that their current location is well known by Sarawakians as a destination to buy traditional Malay confectionaries and pastries.

Should they move away from their current location, they are afraid that they might lose their customers.

Dara Hipni, who also owns a stall at the site, commented that if they stop selling pastry, not only their income would be affected but the economy of the whole village and other villages nearby would feel the impact as well.

This is because some families living in the Malay villages around Lundu use the ten stalls as an outlet to market their products.

“We mostly get our ‘kuih’ stock from families living in our village Kampung Stunggang Melayu and other (Malay) villages around Lundu. If we move out, many ‘kuih’ makers will lose out,” she said.

Mohd Faiz Jaafar, who is the son of one of the stall owners, on the other hand opined that the stall owners should be given a proper place to sell their goods because it promotes Sarawakian heritage and culture.

He said the traditional Malay pastries and confectionaries sold there are authentically and uniquely Sarawakian Malay.

All those interviewed hoped that they would be relocated to a strategic place or an area near the current site.

They said they had been operating at the old Lundu ferry terminal for about 20 years.

He said he came to Lundu to assist the BN machinery to ensure that BN candidate Datin Patinggi Datuk Amar Jamilah Anu captures the seat with a landslide victory.