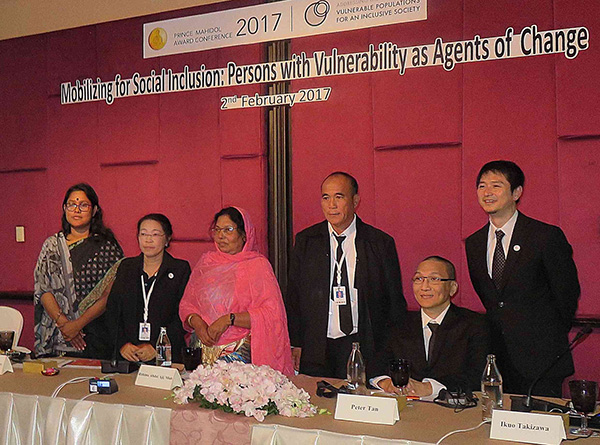 BEFORE I left for Bangkok to participate in the Prince Mahidol Award Conference 2017, I read up a little on the person the award was named after. I am no history buff but some understanding of the background and the purpose of the conference would be useful.

Prince Mahidol of Songklawas the 69th child of King Chulalongkorn and the 7th of Queen Savang Vadhana.

He was born on January 1, 1892 at the Grand Palace in Bangkok. Having the distinction of being the father of King Ananda Mahidol and King Bhumibol Adulyadej, he is known as the father of two kings.

His active role in establishing the foundation for the development of public health earned him the recognition as the Father of Modern Medicine and Public Health of Thailand. He passed away at the age of 37 in 1929.

The Prince Mahidol Award was founded by the late King Bhumibol in 1992 in conjunction with the 100th anniversary of the birth of Prince Mahidol. The internationally-recognised award honours individuals and institutions that have made outstanding contributions in the fields of medicine and public healthcare.

The Prince Mahidol Award Conference (PMAC) is an annual international conferencefocusing on policy-related public health issues of global significance.It is a closed event. Attendance is by invitation only.

The theme for this year is “Addressing the Health of Vulnerable Populations for an Inclusive Society.”

It is recognised that these groups generally have difficulty in getting healthcare due to financial, political or infrastructural constraints. These shortfalls have to be addressed in order to make society more inclusive.

The Japan International Cooperation Agency (JICA) being one of the co-hosts of the conference nominated me to speak as a person with vulnerability and an agent of change with regards to healthcarein Malaysia.

There were four other panellists at the parallel session. Two were from Bangladesh and two from Thailand. All of us are or were involved in JICA projects one time or another.

It was a rather rushed trip for me. My wife and I flew to Bangkok on the morning of Feb 1 and left for the airport the next evening after I made my presentation and attended the welcome dinner. That was about as much time as she could spare to accompany me due to her busy work schedule.

Deputy Director General of JICA Ikuo Takizawa moderated the parallel session. As the panellists spoke in their native languages, three translators were on hand to perform simultaneous translations of English, Bengali and Thai.

We may all come from diverse backgrounds but our one common denominator was we are working to improve access to healthcare in our respective countries.

Rahima Khatun is a community leaderin Sultanpur, Bangladesh. Shespoke of how she mobilised the people in her village to develop a support system to reduce maternal and child death.

Rod Koohaa from Thailand talked about his work in mobilising the community to provide voluntary and long term care support for older persons.

He does all these free of charge. It was especially touching when he revealed how he had to sell rice from his pantry to get money to buy fuel for his motorcycle so he could move around and continue with his voluntary work.

Krissana Puttawong is a registered nurse and head of Primary and Holistic Care Unit of Khuntan Hospital in Thailand. In her position now, she works on long term care and elderly care in the clinic and community. She and Rod works together on similar projects.

It was an honour for me to be among the panelists who are all respected agents of change in their own right. I presented in my capacity as the International Coordinator of the Disability Equality Training (DET) Forum.

This is a network of over 300 DET facilitators from 38 countries across Asia Pacific, Africa and Latin America.

The title of my presentation was A Journey of Transformation: Improving Healthcare for Persons with Spinal Cord Injury. I shared about my advocacy work which all linked back to being able to access essential services like healthcare and education.

I am particularly concerned with the accessibility to healthcare because it is imperative for people with spinal cord injury (SCI) to go to the hospital for regular check-ups.

One of the reasons I am living with chronic kidney disease is because I could not go to the hospital for treatment when I was afflicted with recurring urinary tract infections in 1995. I believed if I had gone to consult a doctor, it would not have led to this dire situation now.

I explained that healthcare in Malaysia is free for disabled persons registered with the Department of Social Welfare. Affordability of healthcare is not the issue. Accessibility is.

We are hindered by the poor connectivity in the built environment and public transport and also the barriers within the hospitals. We face great difficulty when going for check-ups.

However, my work on improving accessibility is made easier by very supportive doctors of University Malaya Medical Centre whereI have been going for my regular check-ups since 2006. The doctors there are always striving to make healthcare and the hospital more accessible and inclusive.

I shared about the Disability Equality Workshops I conducted for doctors and therapists to remove physical barriers in the hospital, and myparticipation in the Steering Committee on Empowering Persons with Spinal Cord Injury.

The committee has identified three areas to work on. They are creating a health-literate SCI community, developing peer support and promoting shared decision making. The purpose is to get people with spinal cord injury involved in their own healthcare as much as possible.

Disability rights advocacy is mostly voluntary. It is difficult if one has little to no income to support daily living expenses. I told the audience I set up a company to offer disability-related trainings and what I make from the venture is used to support my voluntary and non-paying advocacy activities. Some of the audience were impressed by this approach.

Finally, the takeaway message from my presentation is that becoming an agent of change is not a goal but a commitment to an endless journey. With determination, guidance, support and opportunities, persons with vulnerabilities can be empowered to become agents of change.

If someone like me who started with nothing can accomplish this much, anyone who wishto become one certainly can.

Despite my short time at the conference, I managed to catch up with old friends and made some new ones too. Most importantly, I got to learn about the healthcare situation of vulnerable populations in other countries and how they are being resolved. All in, it was a fruitful trip albeit a very tiring one.

Previous Article‘Proper safeguarding of Native interests important function of government’: The Gazette
Next Article A lesson of tears and toiling breath