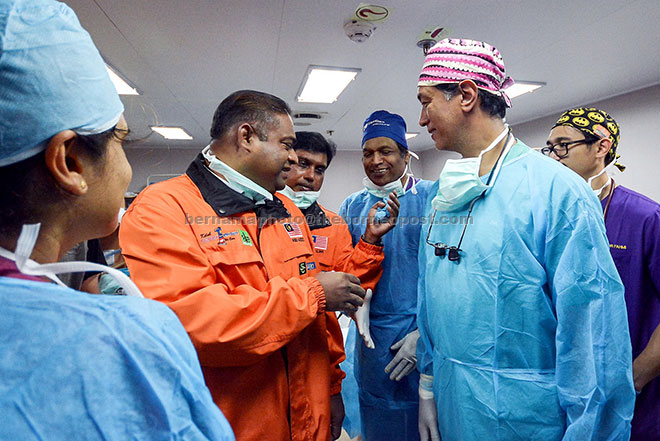 ON BOARD THE NAUTICAL ALIYA IN THE BAY OF BENGAL: ‘Food Flotilla For Myanmar’ humanitarian mission head Datuk Seri Abdul Azeez Abdul Rahim has dismissed allegations that the 500 tonnes of food and supplies delivered to the port of Yangon have been seized by the Myanmar Army.

He said the supplies were currently at a warehouse at the port and in the process being delivered to the Rohingya people in Myanmar’s Rakhine province.

According to Abdul Azeez, the delivery process using ships to the province would take about three days.

“Delivery will be completed in the near future and Malaysians should not believe rumours that the goods have been confiscated. It’s simply false,” he told reporters after witnessing surgical training by a medical team in the ship’s operation theatre yesterday.

He said this when asked to comment on claims made on social media that the supplies were seized by the Myanmar Army.

The Nautical Aliya had docked in the port of Yangon to deliver aid to the Rohingya community in the country, before continuing its journey to Chittagong, Bangladesh.

Elaborating further, Abdul Azeez said he would ensure that the supplies sent were received by the Rohingya people in Rakhine.

“The delivery of these supplies will be monitored by the Malaysian Ambassador to Myanmar, Mohd Hanif Abdul Rahman, to make sure it reaches the Rohingya people.

“It is understood that other countries are also sending aid and the Myanmar government is currently tabulating all the aid sent,” he said.

Meanwhile, asked whether permission from the Bangladesh Government to allow the mission’s volunteers to disembark and travel to Rohingya refugee camps in Bangladesh had been obtained, he said it was still pending.

“We have yet to get the approval for the volunteers to go to the refugee camps, and I have informed Prime Minister Datuk Seri Najib Tun Razak on the matter.

“God willing, we will try our best and hope Malaysians are praying that we are allowed to go down and deliver the aid,” he said.

Abdul Azeez said so far he was informed that the Bangladesh Navy would be escorting the Nautical Aliya to Chittagong.

The mission which entered its 10th day is carrying more than 2,000 tonnes of food, medical supplies, daily necessities, as well as clothes and blankets.

The ‘Food Flotilla for Myanmar’ programme is organised by the Putera 1Malaysia Club and the Malaysian Consultative Council for Islamic Organisations.

Volunteers from 12 countries on board the vessel comprise medical teams, educationists, Malaysian and international journalists, as well as representatives of Malaysian and foreign non-governmental organisations — Bernama