MIRI: The 103-year-old Tua Pek Kong Temple here can be further improved upon and promoted as a tourism product, as it has captivating architectural features that attract both local and foreign tourists.

According to Assistant Minister for Tourism Datuk Lee Kim Shin, the temple is not only beautiful to look at but it also has a captivating history.

“This temple may be a common sight for Mirians but for the visitors, the over 100-year-old religious structure is highly captivating and has great history, which is just as captivating,” he said in his address at a Chap Goh Mei celebration hosted by the temple committee at its premises here on Saturday night.

Lee, who is Senadin assemblyman, called upon the temple committee to always ensure the cleanliness of the place.

“Cleanliness is very important, as this temple is not only open to worshippers but also to visitors,” he said.

The Tua Pek Kong is the oldest temple in this division, having survived the world wars and several fire breakouts. Its building is an architectural marvel, with elaborate designs adorning its pillars and raised dragon motifs on its walls.

According to local history, the temple was built by overseas Chinese who were at that time trading or working here, dedicated to the worship of their beloved deity – believed to have helped end a mysterious epidemic that had afflicted them previously.

Meanwhile, the festive event on Saturday was attended by more than 1,000 people of various races, who were treated to a line-up of colourful cultural performances including lion and dragon dances, as well as a Chinese drum presentation.

There were also singing and dancing by little children. The organiser also gave away angpows to the children that night. 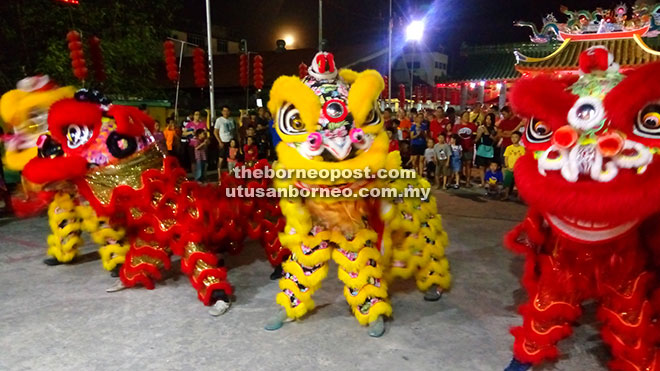 The lion dancers in action. 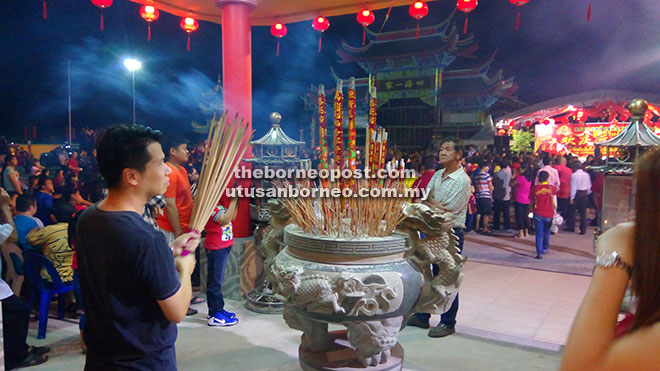 A man takes some time to pray during the Chap Goh Mei celebration.