Saturday, August 20
You are at:Home»News»Sarawak»‘Flower gifts still popular despite not so rosy economy’ 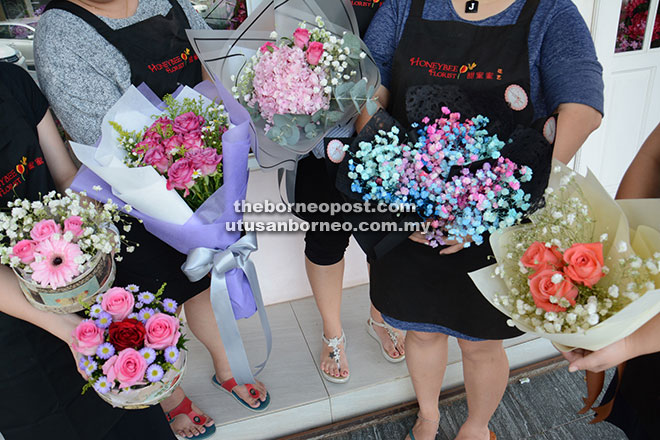 Leong’s staff members show a range of flowers available at her shop.

MIRI: It seems that there are still many adults and youngsters alike who are willing to spend some money on flowers for their loved ones, despite the bad economy.

Florist Amanda Leong told The Borneo Post that the slow economy had not really affected the Valentine’s Day business – on the contrary, she actually received more bookings for flowers.

“The plummeting of the ringgit has affected a lot of imported items. The cost to order flowers has already increased by 10 per cent – making them much more expensive. I initially thought that the inflation might stop many from buying flowers but to my surprise, the business is much better than in the previous year,” she said in an interview yesterday.

Leong’s flowers are imported from Australia, China and India, while the paper packaging materials that she uses are from China.

“With the ringgit at its new low against US dollar and renminbi (Chinese currency), I have no choice but to increase the prices of my products. Thankfully, my customers are very understanding,” she said.

The main challenge for her during this special occasion is the long list of ideas and requests from her customers.

“If you notice, lots of ideas for V-Day come from social network – fried chicken drumstick bouquet, vegetable bouquet, cake-style arrangement. Arrangements that involve ringgit notes being turned into flowers are already a common sight. Still, the main concern is hygiene; we always advise customers to reconsider some of their ideas.

“For example, the fried chicken drumstick bouquet not only takes longer time to arrange and pack, but the handling procedure requires one to be certified in handling food. We normally reject such request. However for vegetable bouquet and other similar requests, we do receive such bookings this year,” she said.

Flowers such as the baby’s breath, hydrangeas, eucalyptus, roses, lilies, tulips and daisies are among the popular choices for Valentine Day, according to Leong.

“Due to the K-Pop trend, majority of the bookings that we’ve received are for Korean-inspired pastel-coloured flowers and packaging. The popular colours are baby pink, baby blue, purple and red.”

The packaging requests, Leong pointed out, leaned more to mini-sized gift boxes and bouquets instead of the normal size range.

“Again, this has a lot to do with the Korean influence, as the people consider anything small or mini-sized as being cute and trendy.

“Economy-wise, we are more than happy to fulfil our customers’ requests. After all, with the increasing price of flowers and paper packaging, making smaller bouquets means that we don’t’ need to use much (materials) and also, we can charge cheaper,” she added.

Being in the industry for only three years, Leong said although she faced rivalry from other shops and freelance florists, it had not really affected her business.

“I started off by marketing my products ‘HoneyBee Florist’ online. At least seven out of 10 youngsters living in the city are Facebook users. My advertising strategy is to get to as many young people as possible to introduce my products. I also believe that leaving a great first impression is vital to keep the business running. With that, I owe the good business to Facebook, which offers free advertising platform.”

Leong said to further boost her business, she had collaborated with a local popular beverage shop. She also said apart from buying presents for their partners, she noted that there was a small group of young men buying flowers for their mothers.

“I suppose it is their way of saying ‘I Love You’ to their mothers, without having to say it out loud,” she opined.