Friday, September 25
You are at:Home»World»Hong Kong police guilty over attack on democracy protester 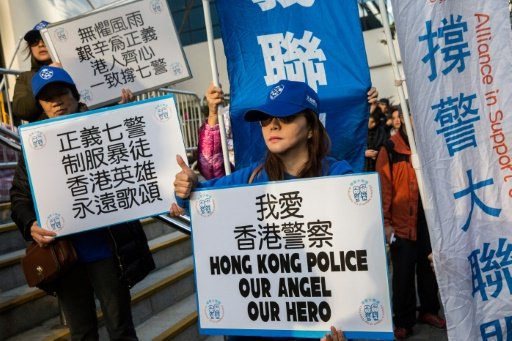 HONG KONG: Seven Hong Kong police officers were found guilty Tuesday of assaulting a protester during pro-democracy rallies in 2014, in an attack that was captured on film and beamed around the world.

Video footage of the attack, filmed by a local network near the city’s government headquarters, shocked residents and dented their faith in the usually trusted police force.

It showed a group of men hauling a handcuffed Tsang to a dark corner in a public park, where he was beaten. One man stood over him inflicting blows while three others were seen repeatedly kicking him.

Police have been criticised for their sometimes heavy-handed treatment of protesters during the 79 days of rallies and street blockades which brought parts of the city to a standstill.

Hong Kong’s district court found that one officer had stamped on 40-year-old Tsang and that four other officers kicked him. Two other officers did not participate but watched.

“Every police officer has a duty to prevent the commission of a crime, even by fellow police officers,” a press summary of the verdict said.

Judge David Dufton said in court that Tsang suffered injuries to his face, neck and body during the assault.

The charge carries a maximum sentence of three years.

Rival protesters gathered outside the court, with pro-police supporters outnumbering a small group of democracy demonstrators.

Using loudspeakers they chanted: “Support the seven officers” and “Reasonable enforcement of the law”. – AFP