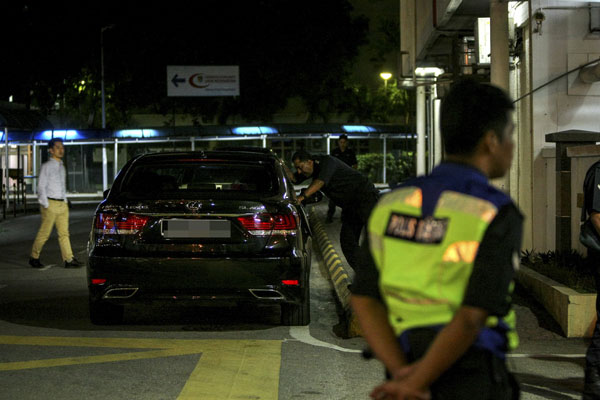 A police officer talking to the driver of a North Korean Embassy vehicle at Institute of Forensic Medicine at Kuala Lumpur Hospital. — Bernama photo

KUALA LUMPUR: The police have arrested a Malaysian man to assist them in the investigation into the killing of Kim Jong-nam, elder half-brother of North Korean leader Kim Jong-un, on Monday.

Selangor police chief Datuk Abdul Samah Mat said the 26-year-old man is believed to be the boyfriend of an Indonesian woman suspect who was arrested early yesterday.

The man was arrested in Ampang at 6pm on Wednesday, he said.

“We arrested the man to assist the investigation. The man was held to help trace the Indonesian woman. She was arrested early today (yesterday),” he said to Bernama.

Earlier yesterday, Inspector-General of Police Tan Sri Khalid Abu Bakar, in a statement, said a woman who went by the name of Siti Aishah and was born in Serang, Indonesia, on 11 February 1992, had been arrested. She held an Indonesian passport.

Siti Aishah is the second woman to have been arrested over the killing of Jong-nam.

The first woman, identified as Doan Thi Huong, 29, bearer of a Vietnamese passport, was arrested at KL International Airport 2 (klia2) at 8.20am on Wednesday.

Last Monday, Jong-nam was reportedly at klia2 at 8am to board a flight to Macau an hour later when a woman suddenly covered his face with a cloth laced with poison.

Jong-nam, who had used the name Kim Chol, reportedly died on the way to the Putrajaya Hospital.

It is learnt that the police are seeking four men to assist the investigation. — Bernama