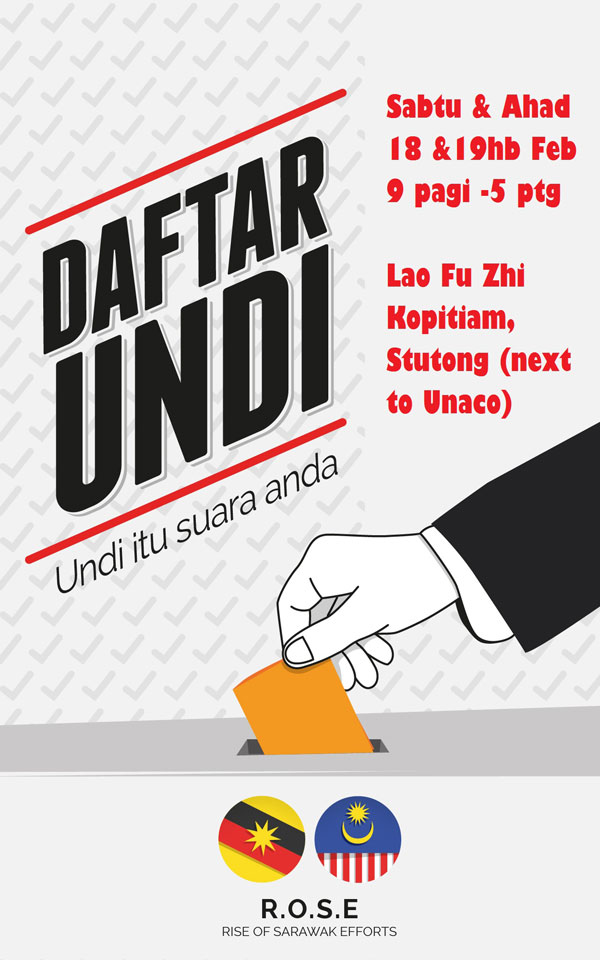 “We are starting the 2017 voter registration drives with the hope that more Sarawakians will be able to participate in the upcoming general election. We will set up a booth at Lao Fu Zi Kopitiam in Stutong (next to Unaco Supermarket) from 9am to 5pm this Saturday and Sunday.

“Our service booth  will then go to Kuching Sentral on Feb 25 and 26 (11am-7pm) and subsequently every last Saturday and Sunday of each month until further notice,” a ROSE spokesperson Geoffrey Tang stated in a press statement received here recently.

He urged all members of the public to inform or bring friends and family members to these locations.

ROSE also aims to increase public awareness on the importance of voting through these drives.

There are more than 400,000 Sarawakians eligible to vote but are unregistered.

Tang said it had been widely reported that there were about 4.2million qualified Malaysians but were unregistered voters in the country.

Every year 400,000 to 500,000 people are added to that number if nothing is done about it. It is also reported and admitted by Election Commission chairperson that between the 13GE and June 2016, the increase in the electoral roll was only 354,141. (The Star Oct 23 2016- stand up and be counted ) Tang also noted that the EC had stopped the appointment of assistant registrar officers from political parties after the general election in 2014 alleging abuse of process.