Tuesday, January 21
You are at:Home» 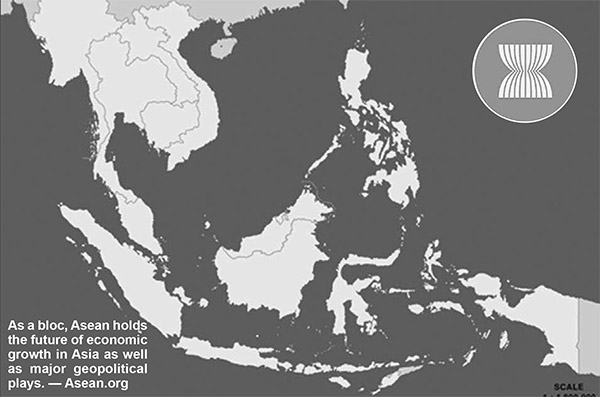 As a bloc, Asean holds the future of economic growth in Asia as well as major geopolitical plays. — Asean.org

IN the waning years of the Cold War, the Association of Southeast Asian Nations (Asean) was widely regarded as the world’s most successful third world regional bloc and a role model for greater cooperation.

However, the last two decades have been tough on Asean.

Its reputation and credibility have taken repeated beatings from the Asian Economic Crisis (1997 to 1998) and China’s encroachment of the South China Sea (2016).

Apart from close geographic proximity and minor dietary similarities, there aren’t any real common identifiers that can be used to lump Asean states together.

Diverse politically, economically, culturally, religiously, and linguistically, those who dream and toil for a unified Asean don’t really have much to work with.

There is a general understanding that the policy of non-interference has been and continues to be dogmatic shackles binding the appendages of Asean, preventing it from addressing important issues like the Rohingya conflict in Myanmar, contraband smuggling across the Kalimantan-Sarawak border, and the military insurgencies in the south of Thailand and the Philippines.

However, the notion that the doctrine of non-interference is an absolute core Asean principle (the ‘Asean Way’) falls apart upon closer and more rigorous scrutiny.

Former Asean secretarygeneral Rodolfo Severino denies that the ‘Asean Way’ of non-interference is applied absolutely or dogmatically, based on an ill-conceived ideology.

Even though the principle of non-interference appears to be adequately codified in most of Asean’s documents, such as the 1967 Bangkok Declaration and 1971 ‘Zone of Peace, Freedom and Neutrality Declaration’ in Kuala Lumpur, adherence to the principle itself is hardly borne out of a supreme dedication to the founding statutes of Asean.

No, the principle most definitely came into extensive practice through pragmatic necessity in serving perceived national interests or those of various ruling regimes.

Empirical evidence suggests an alternative narrative, one that paints Asean states interfering in each other’s internal affairs from the onset of Asean’s inception.

For instance, there were major violations carried out at the apex of the Cold War where Thailand supported various insurgencies within the neighbouring country of Burma.

Another prominent example would be the deliberate delay of Cambodia’s admission into Asean.

In addition, Asean also formed a troika to help mediate and dissipate political tensions in Cambodia.

First and foremost, Asean required that a coalition government be formed in Cambodia.

These conditions mandated all political parties in Cambodia to participate in the 1998 general election.

The membership terms also subsequently led to the amendment of Cambodia’s constitution.

By imposing membership conditions on Cambodia but not Myanmar on political and stability issues, Asean showed that non-interference is not an absolute.

Part of the reasons on why the principle of non-interference is so subjective (one moment gospel truth, the other a mild inconvenience) is the nonexistence of crucial international Asean institutions.

Asean was formed without structured institutionalisation and the previously defined ‘Asean Way’, which emphasises loose and ad hoc mechanisms.

Decades of relevant international experience seem to indicate that effective institutions are paramount to the success of regional integration efforts.

Over time, regional institutions must evolve to effectively define and enforce laws, advocate for regional best practices, and track the progress of deliverables and commitments.

The process of building a cohesive socioeconomic community that systematically integrates disparate economies is complex.

Therefore, strong institutions must be established to facilitate and, if necessary, enforce appropriate institutional procedures in each member state to bind them to the common Asean process.

Despite its flaws, the European Union (EU) is an accurate example of a heavy institutionbuilding process, defined by a customs union and a large and powerful secretariat, among other distinctive features.

This came about through a strenuous political process backed by not so insignificant financial and technical resources.

Alternatively, the Asean institution building process could aim for a more nimble light institutional process that is politically acceptable to Asean states at the present moment.

Through this nimble institutional process, existing institutions or institutional cooperation can be enhanced and developed to facilitate more effective integration.

Referendum that broke the EU’s back

Apart from positive examples, Asean can also draw from the EU some cautionary tales.

Chief among these lessons would be the Brexit saga.

The unprecedented and unexpected result illustrates that the deliverables and advantages of regional cooperation are not always self-evident.

There is already dreadfully low awareness among a significant chunk of Asean inhabitants regarding the very existence of Asean itself, never mind its benefits.

Additionally, it would be wrong to assume that Asean regional cooperation would progress in a linear positive upward direction – especially after the establishment of the Asean Economic Community (AEC) in 2015.

Asean states must always be vigilant and ready to face unexpected disruption and reversal of cooperation.

Member states must tread carefully and cannot continue the assumption that Asean is constantly indispensable and central to every other member government.

In conclusion, Asean must finally start to realise its need to become more internally consistent, structured, and vigilant.

As a bloc, Asean holds the future of economic growth in Asia as well as major geopolitical plays.

It has already been 50 years since the foundation stone of Asean was laid, hopefully, we don’t need to wait another half century for Asean to start becoming what it was always meant to be, a key arbiter of socio-political and economic power in the world; a better (and more Asian) EU.

Comments can reach the writer via [email protected] theborneopost.com.