Saturday, August 13
You are at:Home»News»Sarawak»SPOT shines spotlight on classical opera 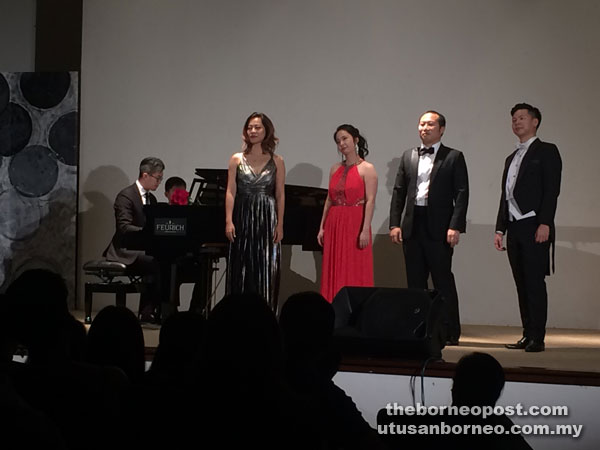 From left: Pianist Chen, sopranos Teo and Ang, and tenors Lau and Koh during one of their pieces.

KUCHING: Classical opera is popularly associated with three things — rich people’s entertainment; falling asleep in the chair when forced by cultured friends to attend a recital; and the fat lady wearing a horned Viking helmet who sings at the end.

In Kuching, opera is virtually unheard of as part of the arts scene, so there might have been a couple of raised eyebrows when the Singapore Pocket Opera Theatre (SPOT), held on Saturday night at the auditorium of Chinahouse @ The Old Courthouse, sold out very tidily earlier in the week.

Evelyn Ang and Felicia Teo Kai Xin plied the upper octaves as the sopranos, while the two tenors were Jeremy Koh, joined by Kuching’s own Alan Lau. Pianist Vincent Chen (together with his unnamed score page turner) knuckled down to work the ivories on the grand piano.

While neither Brünnhilde nor Richard Wagner made an appearance to fulfil stereotypes, the full house was treated to 16 pieces that enthralled and delighted.

One factor that helped tremendously towards understanding opera was the ‘Mysterious Voice in your Head’, the unseen narrator (Poh Sze-Lyn) of the show who provided amusing introductions to each piece.

Comedy made opera more accessible. In ‘O Sole Mio’, the singing parts seemed up for grabs, with Koh getting interrupted every time he opened his mouth. They got their laughs when he completely missed his cue later.

In ‘Spamalot: A Song That Goes Like This’, Ang and Koh explained the anatomy of a song, sounding increasingly frantic as the song “goes on and on and on”.

If there’s a song that symbolises ‘classical opera’ to the laymen, it would likely be Charles Gounod’s ‘Romeo et Juliette: Je Veux Vivre’ which bounces lightly before it hits the power notes, and with Teo making it look effortless.

Although both are sopranos, Ang’s voice is different from Teo’s. In ‘La Fille du Regiment: Salut a la France!’, Ang’s voice is easy on the ear although the song jumped perkily back and forth through an octave or two.

Among the most enjoyable things about observing individual performers is versatility. Koh introduced himself to the audience with a familiar tune—‘Il Rigoletto: La donna e mobile’ by Giuseppe Verdi—which was playful. When he emerged again four items later, it was with ‘L’arlesien: E la solita storia del pastore’, or Federico’s Lament, a heart-rending song about loving one woman deeply but getting married off to someone else.

Lau’s voice seemed to have found its home in ‘Les pecheurs de perles (The Pearl Fishers): Je crois entendre encore’, said to be one of the most difficult songs for a tenor.

Since no opera should pass through Kuching without a performance of Gioachino Rossini’s ‘Duetto buffo di due gatti’ (A Humorous Duet For Two Cats), Ang and Teo carried on a lengthy musical conversation all conducted in meows as they tried to win Koh’s affection.

Koh escaped at the end of the song, only to have Lau burst comically into the scene with ‘Ecco, ridente in ciel’, from Rossini’s 1816 opera ‘The Barber of Seville’, to see if he had any better luck with the ladies.

SPOT rounded off with a familiar tune—Con te partiro (Time to Say Goodbye)—which once again, showed off the rich tones and impeccable vocals from the ensemble, and brought the house down.

Happily, the performers indulged the audience when the crowd called for an encore, prolonging the experience by an additional three minutes and delaying the fat lady’s aria

Proceeds from ticket sales went to the Kuching Autistic Association.