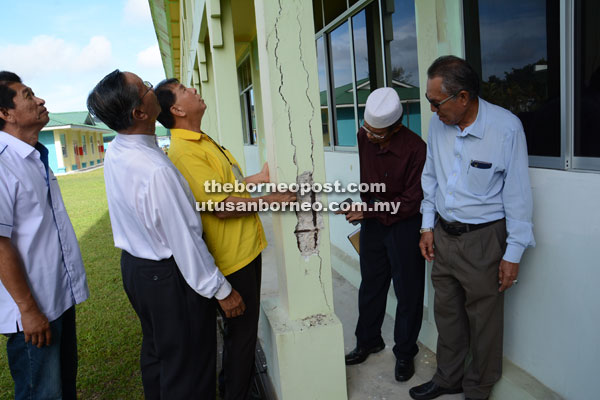 Ting (third left) inspects one of the building’s pillars that has cracks on it – a large chip on the side exposes the steel rods inside the pillar.

MIRI: Parents of pupils and the management of SK Agama Miri hope to see immediate repair works being done on the school’s building to prevent any untoward incident from occurring.

Headmaster Zaidi Abdul Hamid said every now and then, debris would fall from the ceiling – sparking fear of injury among the pupils and teachers.

“We had been in contact with the authorities including Jais (state Islamic Affairs Department) and Ministry of Education, as well as JKR (Public Works Department) to come and assess the building. We are hoping that the repair works could start as soon as possible,” he told reporters here yesterday.

Piasau assemblyman Datuk Sebastian Ting, during a visit to the school last August, noted that the school appeared to be in a deteriorating condition, which prompted him to submit an appeal to the Ministry of Education for funds to be used for repair works.

“Not long after that, the ministry responded and a sum of RM750,000 had been approved for repair works. The only thing left is to wait for the funds to reach the school,” Ting said, adding that he had made another appeal to make sure that the funds would arrive really soon and in exact amount.

“There have been more cracks in the structure since last year, while the wooden ceiling appears to be rotting due to the humid condition. It is said that the condition has been like this since four years ago,” he said when met at the school yesterday.