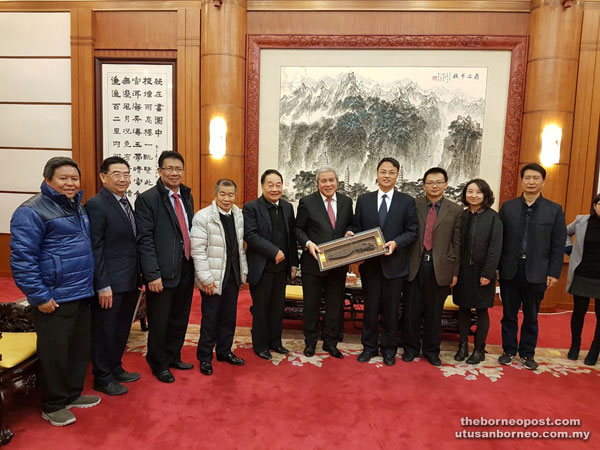 Awang Tengah (sixth left) presents a souvenir to Tzan Jiang Quan during the delegation’s courtesy call on the latter. Also in the picture are (from third left) Julaihi, Naroden and Wong.

Second Minister of Resource Planning and Environment Datuk Amar Awang Tengah Ali Hassan said Malaysia has been spearheading the halal industry for the benefit of Muslims and non-Muslims around the globe.

“Being the pioneer in halal certification, Malaysia ensures the integrity of halal products and services through strict compliance with Syariah requirements whilst still being business focused and the certification is recognised internationally,” said Awang Tengah during a meeting with the Dali City Mayor Yang Jian and government officials yesterday.

He also noted that Yunan province (which includes Dali City) has a sizeable Muslim community in comparison to the 21 million Muslim population throughout China.

Awang Tengah added that the Sarawak Government had established the TMHH which covers an area of 124,517 hectares making it the largest among all the other halal hubs or parks in the region.

Among the investment potentials in TMHH he revealed is the cultivation of food crops; aquaculture; poultry and livestock; food processing; cosmetics; and health products.

“TMHH is also accredited as HalMas (Halal Malaysia) status by the Halal Development Corporation in 2010. With this status, the operators, industry players and logistics service providers who invest in this area will be able to enjoy incentives,” said Tengah.

TMHH he added also has a number of competitive advantages including a large land bank, extensive infrastructure and the deep water port while the current airport would be upgraded.

To date, the Sarawak Government has improved the infrastructure development such as electricity, telecommunication, port, water supply road among others in TMHH in order to enhance its connectivity to other main cities in Sarawak.

“With its strategic location, Sarawak can be used as a springboard for companies to penetrate the global halal market,” he added.

Awang Tengah also revealed that Sarawak’s economy has been able to grow at four to five per cent annually over the last few years despite the slowdown in the global economy.

On another note, Awang Tengah revealed that China has remained an important trading partner as well as a major source of Foreign Direct Investment (FDI) for Sarawak.

In 2015, Sarawak’s export to China totalled RM7.4 billion while imports were valued at RM4.5 billion.