Saturday, September 26
You are at:Home»World»Suicide bomber kills 51 near Syria town taken from IS 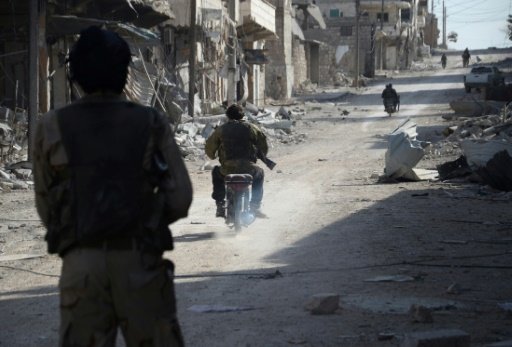 Nazeer al-Khatib with Rana Moussaoui in Beirut | Syrian rebels patrol in the northwestern border town of al-Bab on February 24, 2017 after Turkish-backed rebels announced the recapture of the town from the Islamic State (IS) group -AFP photo

AL-BAB, SYRIA: A suicide bomber attacked Turkish-backed rebels outside the Syrian town of Al-Bab Friday, killing 51 people in a major blow just hours after they hailed its capture from the Islamic State group.

The bomber blew up a vehicle packed with explosives outside a rebel command centre in the village of Susian, eight kilometres (five miles) northeast of Al-Bab, the Syrian Observatory for Human Rights said.

It said the majority of those killed were civilians.

There was no immediate claim for the attack, but rebels blamed it on IS, which had put up fierce resistance in Al-Bab for weeks.

“(Abu Bakr) al-Baghdadi’s dogs could not bear their huge loss, and their suicide bombers have begun to take revenge,” said field commander Abu Jaafar of the Mutasem Brigades.

He said rebel fighters, Turkish soldiers, and civilians from Al-Bab had called a meeting in Susian “to organise a security apparatus and set a plan for rebuilding Al-Bab”.

“This information reached the (IS) sleeper cells, which prepared a car bomb” that detonated at Susian around 0800 am (0600 GMT), he told AFP.

Abu Jaafar, who was near Susian at the time of the attack, said hospitals in the area were full of wounded.

Separately, two Turkish soldiers were killed in a suicide attack in Al-Bab on Friday as they were carrying out road checks, Prime Minister Binali Yildirim said.

The strategic town, just 25 kilometres (15 miles) south of the Turkish border, was the jihadists’ last stronghold in the northern Syrian province of Aleppo.

An AFP correspondent inside Al-Bab said stray cats were out on the bombed-out streets Friday, sniffing at the bodies of alleged IS fighters.

Doors of shops in the town’s main marketplace had been blown open by bomb blasts, and boxes of food and medicine were scattered on the ground.

A rebel scrawled the name of his battalion — “Mutasem Brigades” — on a wall.

In the town’s south, rescuers and bulldozers were pulling bodies from under the rubble, careful not to detonate any mines left behind by IS.

Turkey sent troops into Syria last August in an operation it said targeted not only IS but also US-backed Kurdish fighters whom it regards as terrorists.

With its support, the rebels launched an offensive to take Al-Bab last year.

It has proved the bloodiest battle of Ankara’s campaign accounting for most of the 71 Turkish losses so far.

On Friday the Turkish army said in a statement that “control of all neighbourhoods in Al-Bab have been secured” by opposition fighters supported by Ankara.

The town was also seen as a prize by Syrian President Bashar al-Assad’s forces, who had advanced to just 1.5 kilometres (one mile) from its outskirts in recent weeks.

The battle against IS around Al-Bab is just one front line in Aleppo province.

West of the second city, which government forces took full control of in December, fighting flared with rebels in its western suburbs even as peace talks got under way in Geneva.

Exchanges of rocket and artillery fire first broke out on Wednesday, centred on the rebel-held district of Rashideen, the Observatory said.

The government responded with intensive air strikes on Thursday that killed at least 32 rebel fighters.

A fragile ceasefire between government forces and non-jihadist rebels has been in force since late December, brokered by regime ally Russia and rebel backer Turkey.

It has led to a sharp reduction in fighting in many areas.

But parts of the country which are held by IS or its jihadist rival, former Al-Qaeda affiliate Fateh al-Sham Front, are not covered by the truce.

The talks in Geneva between government and opposition representatives formally opened on Thursday.

They are the fourth round of UN-brokered negotiations, aimed at ending a conflict that has dragged on for nearly six years and claimed more than 310,000 lives.

by Nazeer al-Khatib with Rana Moussaoui in Beirut -AFP