Friday, December 3
You are at:Home»Columns»Uncle DI»A fiduciary duty to look after the weak in society 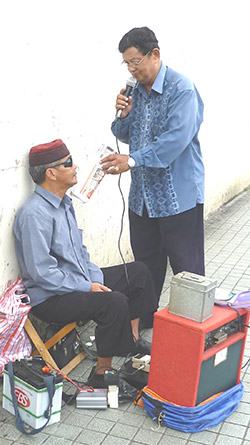 Singing for a shilling.

IN his book, ‘Malay Politics and Perabangan’, Shobra Publications Sdn Bhd (1999), the late Abang Yusuf Puteh writes, “The Malays have their own phrases for types and levels of politics.”

Of the several kinds on his list – Politik minta; Politik Pak Turut; Politik Pak Anggut; Politik Lalang; Politik Padi; Politik Pak Malang; Politik Gerai; Politik Penadol – the first, Politik minta, “corrupts the mind and dehumanises the heart”. He adds, “The overall results are: (a) restraint on leadership potentials, and (b) creation of what I call a beggar’s tendency. The Malays must rid themselves of this corrupt mentality, and learn to: (a) be self-reliant, and (b) value self-esteem. The leaders must realise that politik minta is a great moral shame. What has been happening in Malay politics is that politik minta is in fact encouraged by the leaders or those aspiring to be leaders for two main objectives: (a) by getting what the people ask they create the impression that they have power and influence, and (b) to make the people dependent on their leadership, the blackmail of politics.”

You do not have to agree with the author; he was talking about the political situation of his day, as he saw it. But isn’t there truth in what he has written?

The question is this: have things in Malaysia changed since?

Last week I read about a quarrel between Umno and PKR in Batu Pahat over the gift of wheelchairs to some OKU there. Each vied for credit, creating the impression that they and only they have the right to help and thus have the power to influence and to make people dependent on their leadership.

Abang Yusuf’s point is on spot – an example of the “blackmail of politics”.

Back to Sarawak, the criticism levelled at an OKU exercising his right to stand as a candidate in the recent by-election in Lundu is another example of the blackmail. The OKU was made to look like he was so dependent on a political party’s pleasure.

I thought that a similar treatment of an OKU in 2011 in Sri Aman was the first and the last attempt to dispossess a recipient of welfare aid for Lawan Towkay – for flying an opposition flag in front of his house. I was wrong, utterly wrong.

Now that Malaysia has acceded to the International Convention on the Handicapped, any politician worth his or her salt should take note of this fact before any makes a statement that may jeopardise the humanitarian aid that OKUs have been receiving. The money that they have been getting comes from the taxpayers, not from any political party’s coffers as such.

The Cobbold Commission Report – the Report which was accepted by the Sarawak Legislature in 1962 as the basis for Sarawak to participate in the Project Malaysia – is clear on welfare funds. A proportionate sum of money if allocated for the funding of Muslim schools in Peninsular Malaysia by the federal government would be channelled for welfare purposes in both North Borneo (Sabah) and Sarawak. This is the kind of money intended for dispersal to the handicapped members of society in the Borneo States.

For those who can take their eyes off from their smartphones for a few minutes, read that part of the Cobbold Commission relating to:

“15. RELIGION (3) Sections 36 and 37 of the Malayan Education Act, 1961, should not be applied to North Borneo and Sarawak; federal law should not provide for special financial aid for the establishment of Muslim instructions or the instruction in the Muslim religion of persons professing that religion in respect of North Borneo and Sarawak without the concurrence of the State Government concerned; AND the federal government should be amended to secure that where federal law provides for special financial aid for Muslim institutions or Muslim religious education in pursuance of Article 12(2) the Malaysian Government WOULD GRANT to North Borneo and Sarawak Governments PROPORTIONATE amounts for SOCIAL WELFARE PURPOSES in those states. Any grants paid out by the Malaysian Government from the proceeds of lotteries conducted by the Social and Welfare Services Lotteries Board would not be regarded as payment made from Federal revenue in this respect.” (Words in capital letters are my emphases.)

It is clear that the money for social welfare aid given to the OKU in Sarawak does not come from a political party’s funds. Therefore, no politician in power can claim that these OKUs are obliged to be grateful to him or her; in other words, ingratitude does not factor in the candidacy of an OKU in any election as long as he or she has the other qualifications – citizenship and a good brain.

I know that I’m trespassing on a turf that belongs to a fellow columnist; my encroachment is justifiable only where the issue of going against the boss (lawan towkey) is of public importance. Three senior politicians from Sarawak have ostracised OKUs, giving the impression that the OKUs are not being treated as special people – in need of sympathy and help from the people of Sarawak as a whole. They are being treated as dependents of political parties in power.

This politik minta is truly a moral shame to some of our leaders. It hurts the feelings of many decent people in this state.

It is never the choice of these less fortunate members of our society to be in the condition that they are in.

There are any number of reasons why they are in their conditions now – from accidents and birth defects. They should be the object of charity, not of ridicule. To withdraw their aid because they are not supporters of the ruling party is – I don’t know!

It is the government’s fiduciary duty to look after the weak in society. These handicapped people are weak people. The politicians should never blackmail them into voting for them; they have every right to stand for election and their share of welfare funds must never be withdrawn even if they do not vote for the ruling party.

They do not wish to get themselves involved in any controversy. Hence my part in speaking out for them after I had talked to a couple of them over the weekend – blind man who sings at a wet market, a severely challenged former inmate of the Cheshire Home and, a friend of many years.

Previous ArticleUnimas lauded on role in STEM devt
Next Article Jong-nam case: N. Korea should be thankful, not worsen situation