Sunday, January 23
You are at:Home»Columns»Other Columns»Jong-nam case: N. Korea should be thankful, not worsen situation 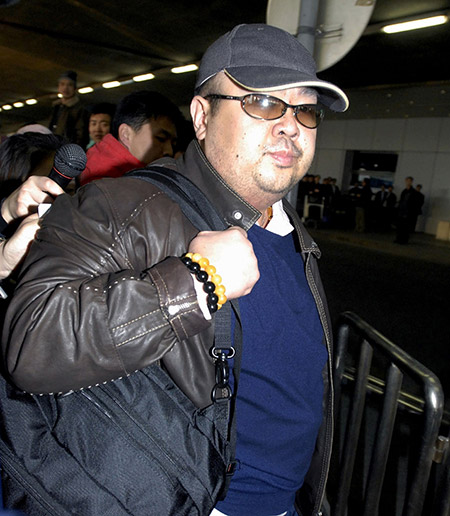 This photo taken on Feb 11, 2007 shows a man believed to be Jong-Nam, walking among journalists upon his arrival at Beijing’s international airport. — AFP photo

KIM JONG-NAM, the estranged elder half brother of North Korean leader Kim Jong-un, might not be widely known in Malaysia before. But the death of a North Korean man at KL International Airport 2 (klia2) on the morning of Feb 13 shocked the whole world because the man, who had entered the country using the name Kim Chol on Feb 6, was believed to be Jong-nam.

International media reports quickly aired the identity of the man as Jong-nam and claimed that his death in Malaysia was at the hands of North Korean agents.

The news of his death and the investigation into the case quickly became the main daily topic of the local and international media. Other than the South Korean media, those from Japan and China also sent journalists to Malaysia to cover the case.

The Royal Malaysia Police (PDRM) then detained four suspects – a woman using a Vietnamese passport, a woman Indonesian national, a Malaysian man and a North Korean man to assist in the investigation.

However, the Malaysian man was later released on police bail.

Inspector-General of Police Tan Sri Khalid Abu Bakar, prior to this, stated that PDRM needed 14 days to unravel the case. But, only after 11 days until Friday, PDRM confirmed that the death of the North Korean man was caused by the VX nerve agent, which is listed as a chemical weapon.

According to his passport number 836410070, Kim Chol was born in Pyongyang, North Korea on June 10, 1970.  However, the North Korean embassy was not satisfied with the investigation conducted by PDRM.

Its ambassador to Malaysia, Kang Chol, in fact accused Malaysia of being in cahoots with Pyongyang’s enemies in the murder case.

On the action of the North Korean embassy, political analyst from Universiti Malaya, Assoc Prof Dr Awang Azman Awang Pawi commented that this would not help in a smooth police investigation but would complicate it instead.

“The North Koreans should be thankful to PDRM which could identify and very efficiently acted and made arrests in a short period of time. If the North Koreans are not happy or question the Malaysian police investigation on the case of the death of Kim Jong-nam, they must use the diplomatic channel wisely and not worsen the situation,” he told Bernama.

He said the investigation on the death involved Malaysia’s good name, and if it was not transparently investigated, it would tarnish Malaysia’s image in the eyes of the world.

“They can also use the court’s legal process in Malaysia to sue over any dissatisfaction,” he pointed out.

Awang Azman said what was conducted by PDRM was based on the country’s existing laws to safeguard the wellbeing and peace of the people including foreign nationals here. He said Malaysia had 44 years of diplomatic ties with North Korea since June 30, 1973.

According to him, North Korea first set up its embassy in Kuala Lumpur in 2003 simultaneously with Malaysia’s move to open its embassy in Pyongyang that year.

“Malaysia-North Korea ties were at its best in 2009 and since Malaysia became the first country in the world which waived the visa requirement for North Koreans. Both sides must sit down to solve the case wisely and not be in conflict too often using their respective media,” he said.

On Friday, Khalid stressed that PDRM would comply with the international protocol in conducting the investigation which also involved the second secretary of the North Korean embassy here, Hyon Kwang-song, to help in the probe into the killing of Kim Jong-nam.

Another suspect being hunted by Malaysian police is an employee of the North Korean airline, Koryo Air, who is known as Kim Uk-il, 37.

Jong-nam, 45, was at klia2 at 8am on Feb 13 to board a flight to Macau an hour later when two women suddenly appeared before him and wiped his face with a poisonous liquid. Jong-nam, who travelled with a passport bearing the name of Kim Chol, sought help at a customer service counter at the airport and was rushed to Putrajaya Hospital but died on the way.

On Thursday, Defence Minister Datuk Seri Hishammuddin Tun Hussein reportedly said that the North Korean ambassador was rude in his remarks on Jong-nam’s murder case. He viewed Kang Chol as having crossed the line of duty as envoy with his comments on the investigation into the murder case. 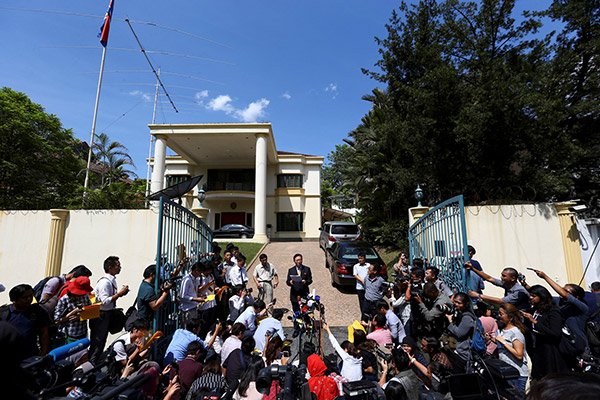 Kang Chol speaks during a news conference on the death of Kim Jong Nam at the North Korean embassy in Kuala Lumpur. — Reuters photo