Sunday, February 5
You are at:Home»News»Sarawak»Log jam wending its way down upper reaches of Balui River endangers lives
For the freshest news, join The Borneo Post's Telegram Channel and The Borneo Post on Newswav. 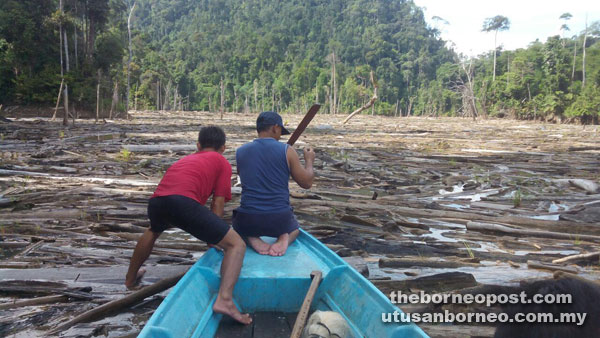 Two men figuring out a way to navigate through the log jam in the upper reaches of the Balui River recently.

KUCHING: Log debris accumulating in Balui River and parts of Bakun Reservoir is a potential danger to river users as well as to Bakun Dam.

The debris, which stretches over 30km in Balui River with the largest volume at Long Jawie area, has been accumulating since 2011.

According to a reliable source, the debris 120km to 150km away from Bakun Dam is brought about by logging activities at places upstream. The debris is brought down to Balui River by the rain.

“The issue has always been there and no one is clearing it.  Many people know about it. The question is what action should be taken and who should take action,” the source said when contacted yesterday.

When contacted, Murum assemblyman Kennedy Chukpai Ugon confirmed that the debris had long existed and was getting worse.

“The debris has been there. There were some gotong-royong (communal) efforts to clear the debris – they tried to get rid of the debris by pushing them to the river banks.”

“However, that is not the solution for the problem because they did not have the means to totally remove the debris.

“Now, if we want to use (travel) the river, we must be very careful. We can only travel daytime but at night time, we must not dare try it,” said Chukpai.

He said the floating debris was dangerous to river users, though the number (of users) might be small.

“It is affecting the people of Long Jawie and Long Busang. It is true that there are not many of them but there are people who still rely on river transport,” said Chukpai.

Meanwhile, CEO of Sarawak Hidro, Zulkifle Osman said he was fully aware of the debris upriver in Balui River, about 150km from Bakun Dam.

“It is still far from the dam. We will not do anything until it reaches within 10km of the dam. When it does we will get a contractor to clean the debris to avoid any clogging,” said Zulkifle.

In Oct 2010, a massive log debris was seen floating in Rajang River. It stretched for several kilometres and was carried even down to Sibu.

The log jam, according to Deputy Chief Minister Tan Sri Datuk Amar Dr James Masing, who was then Land Minister, was caused by logging activities in the catchment area.

State forestry director then Datuk Len Talif said it was due to the shifting rainfall pattern.