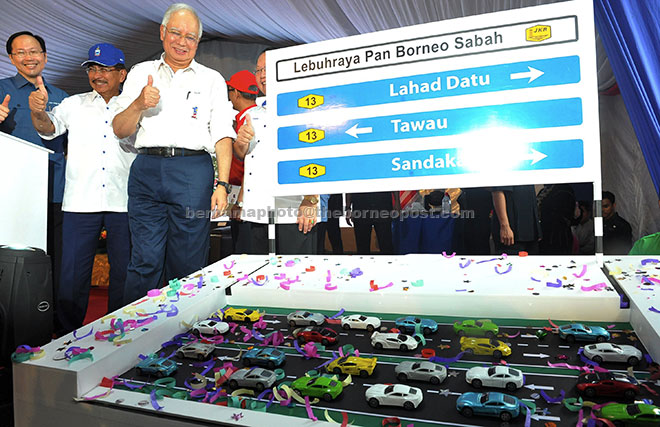 Najib flashes a thumbs-up as he looks at a model depicting the Pan Borneo Highway network in Sabah. Bernama File Photo

SIPITANG: Prime Minister Datuk Seri Najib Tun Razak gave his assurance that the toll free Pan Borneo Highway network in Sabah will be on par with those in developed nations when completed.

He said the Public Works Department, which had a high standard, would ensure this.

“This is not a timber or kampung road. This is a world class highway. This is my commitment as prime minister,” he said in his speech when launching the Sabah Pan Borneo project in Sindumin here today.

Najib was also determined to ensure that the Pan Borneo Highway project in Sabah would be an overview of history as it would change the landscape of development and communication network throughout the state.

“Sabah will get a complete toll-free highway network at an overall cost of more than RM16 billion in five years. This is the contribution of the federal government.

“I want to say this is not over yet. If the financial situation permits, we will give more allocations for highway development for Sabah.

“We want Sabah to change because the state has a high potential,” he said.

Najib also rapped a former prime minister who led the country for 22 years but only built highways in peninsular Malaysia.

“The people of Sabah also want to enjoy highways. Right? Surely, it is not only for the people of the peninsula.

“And, the reality is, today is a historical occasion for Sabah because the first kilometre of the Pan Borneo Highway for this state starts from Sindumin,” he said.

At the same time, Najib also said the Pan Borneo Highway project could create 400,000 jobs for the people in Sabah and Sarawak as well as business opportunities for local contractors.

“I will also ensure only local contractors will work on the Pan Borneo Highway project. Despite the joint venture with foreign contractors, the main jobs must be given to locals,” he said.

During the ceremony today, Najib launched the ground-breaking ceremony for a project to upgrade the 28.4 km Sindumin-Kampung Melalia Road, Sipitang at a cost of RM600 million.

The project involved upgrading the existing two-lane road to four-lane and would entail building two tiered interchanges and three bridges.

It was part of the first phase of the 706 km Pan Borneo mega project starting from Sindumin to Kudat on the west coast and from Ranau to Sandakan, Lahad Datu and Tawau on the east coast.

The project would change the landscape of the Sipitang district which would experience a transformation when the Pan Borneo Highway project was fully completed and to simultaneously become the catalyst in the development of Sabah.

The highway would also ease access to the oil and gas economic corridor area between Sipitang and Kimanis.

Previous ArticleCeiling price for fuel to be announced weekly from April
Next Article B10 biodiesel proven to have lower emisssions, available this year – Researcher