Friday, December 2
You are at:Home»News»Sarawak»Sarawakians set to enjoy lowest electricity tariff in Malaysia 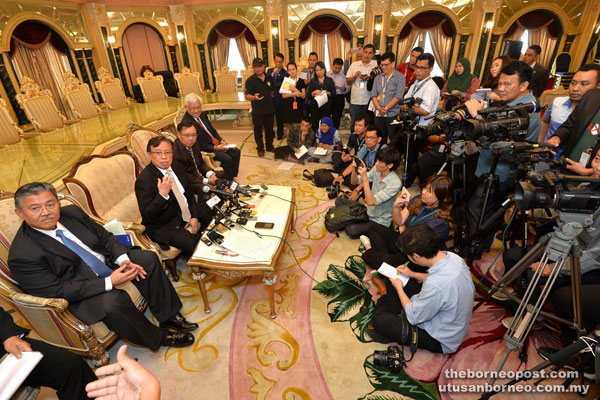 KUCHING: Chief Minister Datuk Amar Abang Johari Tun Openg has assured Sarawakians that the state government will provide the ‘cheapest electricity tariff in the country’ after the acquisition of the mega Bakun hydroelectric plant (HEP), which has a generating capacity of 2,400MW.

“Yes, yes, in the long run, people will benefit. We will be the cheapest because there will be no cost except for operating cost. Once you recover your capital expenditure, then your cost is only in maintenance and operations. So we want that to be transferred to the people. So you don’t have to charge high tariff,” Abang Johari told a packed press conference at his office in Wisma Bapa Malaysia here yesterday.

He said Sarawak was fortunate to have abundant natural resources which it planned to maximise so as to get the optimum results, especially in getting the state to the next level of development, which would be based on digital economy.

On a related issue, Abang Johari who is also the Minister of Resource Planning and Environment, said since Sarawak Energy Bhd (SEB) had been entrusted to take over Bakun HEP, all its assets and environment issues related with it would be taken care of by the corporation.

“Who else will be in the best position to look after Bakun and its environment if not SEB?” he asked.

He was asked to comment on who would be looking into the huge amount of debris which were now floating upstream of Bakun HEP Dam area as a result of logging activities and shifting cultivation over the years.

Recently, The Borneo Post reported that the chief minister would address the issue of the log jam.

Abang Johari pointed out that the acquisition of Bakun HEP from the federal fovernment was one of the two things that he intended to achieve within 100 days of holding office as chief minister.

He took over as the sixth chief minister on Jan 13 this year, after the demise of Datuk Patinggi Tan Sri Adenan Satem on Jan 11.

“The negotiation process (to acquire Bakun HEP) was initiated by the late Tok Nan (Adenan) and his team. But when I took over as captain I wanted to score ‘lah’….(to finally seal the deal). But I did the key negotiation and the Prime Minister had to bring it to the Cabinet. It was not an easy negotiation, you know,” he said in a lighter note.

When interjected whether the next big thing that he wanted to announce was the state cabinet reshuffle, he responded: “No, it has nothing to do with that, but something to do with strategic project”.

When asked whether the state would build more than four HEP dams, Abang Johari said four would be enough for now.

“But if we need to have more in the future, we would apply modern technology where there would be no effect on the local communities and thus, no need for resettlement.”

Meanwhile, Abang Johari who is also the Minister of Tourism, Arts and Culture, said the state could now focus on developing Bakun lake and its islands as tourism resort.

“So if tomorrow we want to develop Bakun as tourism resort, we don’t have to ask the federal government because it’s now under our control.”