Friday, December 2
You are at:Home»News»Sarawak»Team hunts for croc that killed teenage girl 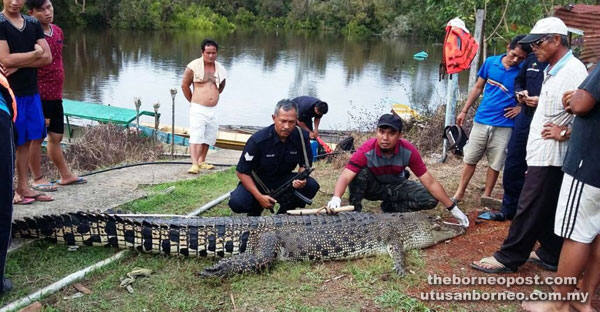 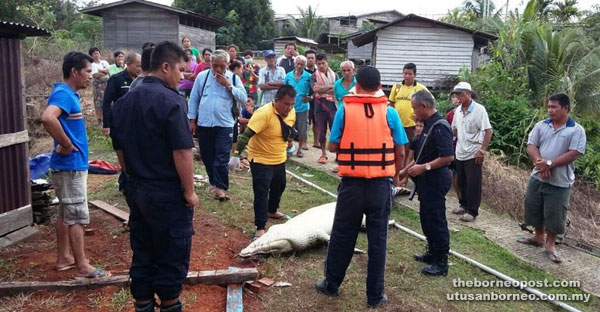 The crocodile after it was brought from the river.

MARUDI: A team comprising four police personnel from the police station here headed by ASP Goldy Jangan and Sergeant Wahid Abdullah and staff of the Forest Department has been despatched to Rumah Jampang Kantan, Sg Tapang to hunt for a crocodile that is believed to have attacked an 18-year-old SPM leaver while she was taking a bath.

Agnes Luang was killed by the reptile when she was bathing in Peking river with her mother on Feb 21.

Joining the team are residents of the longhouse.

According to Baram police chief DSP Gabriel Risut, the operation started on Tuesday at around 2pm and the team was divided into two groups, with one concentrating on Sg Peking.

Gabriel said three of the nine baits that they had placed in the river were missing, believed to have been eaten by the crocodiles and around 3pm on Tuesday they spotted a crocodile some two kilometres away from the site where Agnes was attacked.

Upon request from the longhouse residents, he said the reptile was shot and killed, after which it was brought to the jetty of Rumah Jampang.

Investigation by the Forestry officers found that the 3.35-metre long crocodile was not the one that attacked Agnes, he related.

He said the operation to find the culprit that killed Agnes continued on until 5pm on Tuesday and started again yesterday.