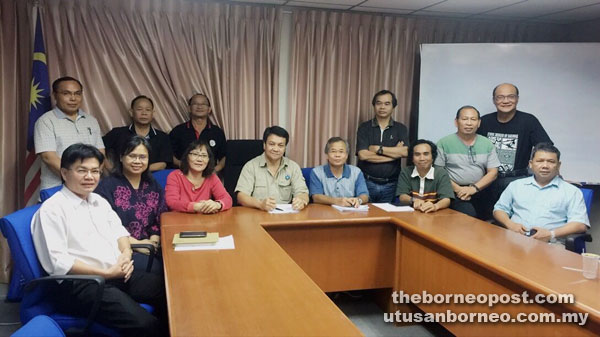 Dr Clarence (seated fourth left) and organising chairman Rijeng Jahet (seated third right), in a group photograph with other members
of the organising committee after a recent meeting.

DBNA-BGA Education Committee chairman Dr Clarence Jerry said the fair is now a yearly event after its success in 2016.

He revealed it will be held over two weekends in four major Bidayuh areas, starting in Serian and Siburan tomorrow (March 11), before heading to Bau and Lundu on April 8.

“The target group in this fair will be the SPM and STPM school leavers as well as current Form 4, SPM and STPM students from the surrounding secondary schools near the selected venues.

“It is hoped that through this fair, we can disseminate education and career-related information to enable youths from the rural areas to make well-informed decisions on their further education endeavours and realistic career paths.

“It is also to inculcate a desire for higher and continuing education among youths from the rural areas,” he said.

He pointed out there is major concern within the Bidayuh community towards the need to create an educated, productive and progressive community which is able to face the future with confidence.

“The challenges facing the Bidayuh youths nowadays are daunting, although these should encourage rather than discourage them. Among (solutions for) these challenges that we hope to address is to give hope through organising this type of fair to disseminate more realistic education pathways for all post-SPM/STPM students.

“There are also a large number of Bidayuh school leavers who are facing an uncertain future as they start working without minimal vocational/technical skills. Bau and Serian Districts have a combined Form 5 and 6 population of approximately 3,500 students in 2017. Only approximately 30 per cent of these will continue into higher education,” he said.

He added the fair also aimed to ignite enthusiasm among parents and students for higher education.

“We are concerned with the general lack of enthusiasm towards higher education, particularly among the rural parents, and so there seems to be a lack of encouragement for their children to pursue technical/vocational training, and higher academic-oriented education courses.

“This is either due to their ignorance of the benefits of these courses, or due to the fear of putting themselves and their children on a trajectory of indebtedness (to repay loans),” he said.

He also paid tribute to DBNA chief advisor, Youth and Sports and Solidarity Minister Dato Sri Michael Manyin Jawong, as the pillar behind all the major events organised by the two associations, including this fair.

He pointed out that Manyin, being a former educationist, has a soft heart for education.

“The fair is seen as a venue for the associations to reach out to the youths and fulfil their advisory role on education.

“Through the fair, we hope to ignite a sense of solidarity among us, and this is already seen from the collaboration effort of the various parties at the ground level during the preparation for the event, especially the DBNA branches,” he said.

He also mentioned this fair was made possible with the support of the programme’s patron DBNA president Datu Ik Pahon Joyik, DBNA Supreme Council members, DBNA Youth Movement, BGA, and the team of volunteers under the DBNA-BGA Education Committee.

“We will make this a yearly event and hopefully our rural students will gain benefits from it, in terms of raised awareness towards education opportunities at college or university level and career-related matters.