Saturday, June 19
You are at:Home»News»Sarawak»‘Urgent for old equipment at Miri Hospital to be replaced’ 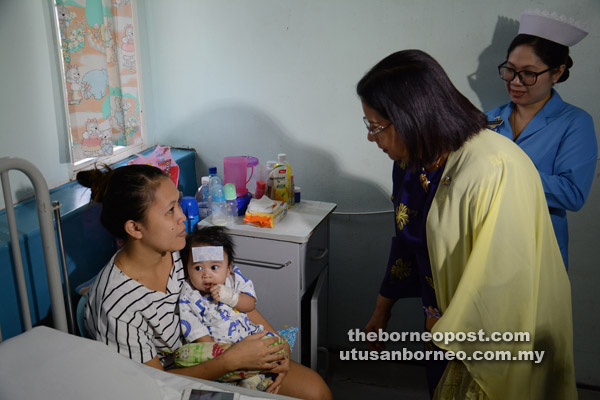 Rohani speaks to a mother during a visit by Puspanita to Miri Hospital Children’s Ward.

MIRI: Miri Hospital desperately needs to replace many of its facilities and equipment after more than two decades.

State Health Department director Dr Jamilah Hashim said at the moment, they are making full use of funds given by the Ministry of Health and would prioritise areas that require urgent attention.

“We are happy that the Ministry of Health (MoH) is very supportive and attentive to our needs. Though the funds may not be sufficient to replace all the old equipment, we are happy that we can at least replace the more urgent ones,” she said when making a welcoming speech during Puspanita visit to Miri Hospital yesterday.

Every October, their institution will send a list of items to be replaced to MoH.

To-date, a number of items have been replaced including old hospital beds, haemodialysis machines and a new computerised tomography (CT) Scan machine.

Dr Jamilah raised the issue of insufficient medical officers in the state where there are over 25,000 positions including for medical officers, doctors, nurses and pharmacists.

“We are keeping our fingers crossed that they could be filled to cope with the increasing population,” she said.