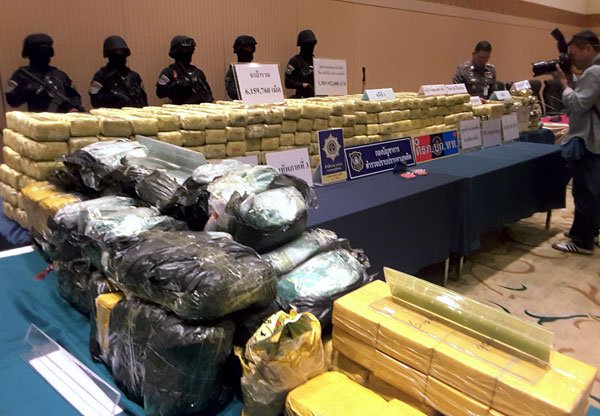 Thai authorities show the drugs seized from smugglers during one of the operations. — Bernama photo

BANGKOK: It has been nearly a year since the 21 suspected Malaysian ‘drug mules’ were tethered by the Thai authorities while allegedly attempting to smuggle 226kg of ‘Ice’ (crystal meth or Syabu) and eight kilogrammes of heroin into Malaysia.

The involvement of so many Malaysians in a single drug smuggling case and the amount of the haul was unprecedented, at least in recent memory of the experienced Thai drug enforcement officers.

Since that case which received wide media coverage, there have been several other attempts to smuggle large amounts of drugs, especially methamphetamine-type drugs, into Malaysia.

Efforts to smuggle large amounts of drugs worth millions of Ringgit into Malaysia since March last year have raised the all important poser on who the Malaysian mastermind is.

However, when queried on the ‘mastermind’ behind the failed attempts to smuggle large quantities of drugs into Malaysia, he would only say that the Thai police had good relations, and cooperated with their Malaysian counterparts.

Sommai however, declined to elaborate on the Malaysian mastermind, leaving the issue entirely with the Malaysian police to probe deeper.

“Information gathered by the Thai side, based on interrogation of people arrested in the failed attempts to smuggle drugs into Malaysia will be relayed to the Malaysian police,” he said.

Nevertheless, he expressed concern at the seemingly brazen attempts to smuggle large quantities of drugs into Malaysia, which he suspected was intended (by the Malaysian mastermind) to be re-exported to third countries and not for local (Malaysian) use.

Based on the attempts to smuggle drugs into Malaysia as reported by Bernama last year and early this year, the quantities are staggering with the value reaching hundreds of millions of Ringgit.

The value of the drugs, noted a high ranking NSB officer, would triple or quadruple if the consignment reached Australian, European or United States markets, which probably explained the syndicate’s cavalier attitude towards drug enforcement and drug laws.

In April last year, a Malaysian man who was detained at the immigration checkpoint in Sadao, with 520kg of ganja hidden inside his furniture-laden lorry, told police he was paid RM1,000 for transporting the drug to Kuala Lumpur.

On Dec 11, two Malaysian men, believed to be drug couriers were nabbed in Chumphon, southern Thai, alongside 140 bars of heroin weighing 52.4kg and 41kg of methamphetamine hidden in a car they were travelling in.

Five days later on Dec 16 last year, also at Chumphon, Thai authorities scored another big success when they arrested seven Thais nationals and seized 500kg of ‘Ice’ from a trailer lorry enroute to the border areas.

A high-ranking Thai drug enforcement officer believed the large haul was destined for Malaysia before export to Taiwan.

On Jan 16 and Jan 21 in Pattani and Songkla, respectively, Thai authorities nabbed two men and seized 858,000 ‘Yaba’ pills destined for a Malaysian buyer.

According to the NSB, both men were believed to have worked for a ‘Malaysian drug lord’ and in a related raid later, the Thai authorities seized another 164kg of ‘Ice’.

He said the man who was arrested by the Thai authorities at Suvarnabhumi Airport in January had sourced his drugs from the Wa State, an autonomous region in Myanmar, before supplying it to Malaysian syndicates for the international market. — Bernama