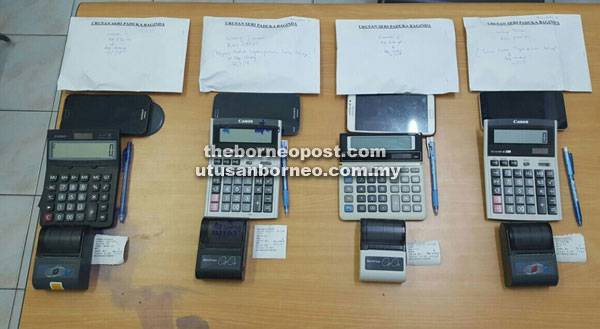 The items seized from the premises at Pujut 1 during Ops Dadu.

MIRI: Police arrested four individuals during ‘Ops Dadu’ on Sunday for alleged involvement in illegal lottery operations at an outlet in Pujut 1 here.

A CID team from the police headquarters also seized four mobile phones, four portable printers, six lottery tickets, four calculators, four ball pens and cash totalling RM2,557 from the premises. The four – aged 19 to 45 – were brought to the police station for investigation under Section 4A (a) of the Common Gaming House Act 1953, which carries a fine of between RM20,000 and RM200,000, or five years’ jail, upon conviction.