Tuesday, August 9
You are at:Home»News»Sarawak»Oppose if state’s rights ignored 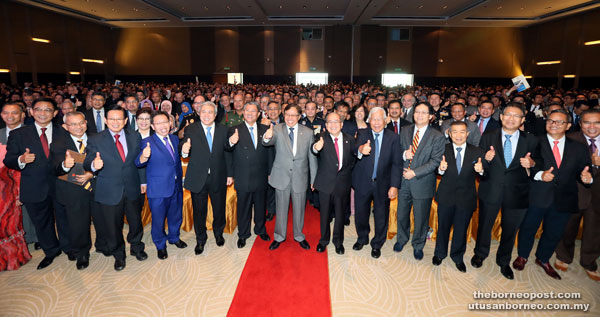 Abang Johari (seventh left), together with his cabinet ministers and civil servants give the thumb’s-up after the Chief Minister’s keynote address.

KUCHING: Chief Minister Datuk Amar Abang Johari Tun Openg wants all BN MPs attending the current session of Parliament to speak out if the amendment to the Stamp Act ignores the rights of Sarawak and Sabah to stamp duty revenue collected in the two states.

The 2016 financial statements are not yet available.

At the moment all the stamp duty revenue goes to the federal coffer although based on the  Malaysia Agreement signed in 1963 stamp duties collected in Sarawak and Sabah should  rightfully be retained by the two states,

This is because administration of land matters in Sarawak and Sabah in under their Land Code.

According to Abang Johari, he met with Sarawakian BN MPs on Monday night in Kuala Lumpur and got the state Attorney-General to provide the BN MPs with the background and express the state’s concern on the Stamp Act amendment.

“We have to get the federal government to acknowledge that if it is based on land transaction and real estate, it is our right and the revenue should come to the state.

“I think they are amending it. It is document-based such as Sales and Purchase Agreement where if you sign the agreement, then automatically you have to pay the stamp duties. Like now, it is RM10 but then you can pay the duties later,” he told a press conference after officiating at the Chief Minister’s Keynote Address with Civil Servants in the state here yesterday.

“This is something we have to work out so I want the MPs to know that it may have certain impact on us and I want them to voice out. If possible, our request is to exclude Sarawak just like what happened to our gas distribution where we have our own law. So they must exclude Sarawak for the fact that land is ours under our own Land Code.”

On Syariah Courts (Criminal Jurisdiction) Act 1965 or otherwise known as Act 355, Abang Johari said the matter was also discussed during the same meeting.

“Actually they have discussed with all the parties from Sarawak and we have suggested something which I cannot divulge. Let Prime Minister Datuk Seri Najib Tun Razak make the announcement.

We discussed and expressed our view and the Prime Minister is looking into our view.”

Abang Johari said the federal government will have to look further into the Bill in view of the Federal Constitution requirement under Article 8.

“We brought the case of Article 8 (of the Federal Constitution) on equality before the eyes of the law.”

Earlier during his speech, Abang Johari said the state government is committed to restore its rights that had been eroded over the years.

“During that time when we were still new, we didn’t know that there are many powers that have been eroded. Maybe we knew but we were afraid to say something about erosion of our power.

“When Tok Nan (the late Datuk Patinggi Tan Sri Adenan Satem) came in, the whole cabinet supported Tok Nan to get back the power that had been eroded.”

Abang Johari said although the state is trying to take back the rights, it does not mean that the state government is ‘fighting’ with the federal government.

“No, we are working together with Putrajaya but if the power is with us, we have to protect our rights. Tok Nan has done it. I can assure you that Abang Jo will continue it.”