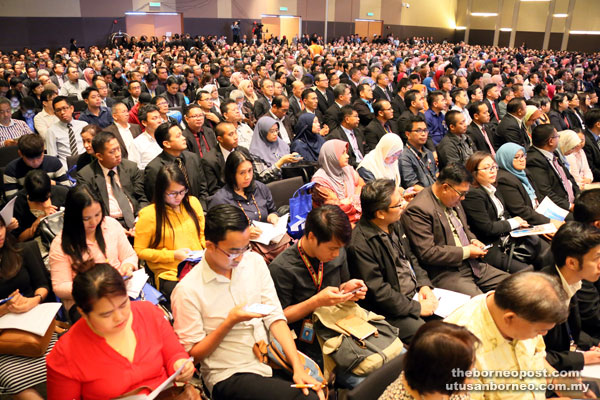 A section of the crowd who attended the Chief Minister’s keynote address.

KUCHING: Sarawak is committed to leapfrog the ICT infrastructure in the state within the next five years to enhance the Internet connectivity, including that in the rural areas.

Chief Minister Datuk Amar Abang Johari Tun Openg said the state government had committed RM1 billion with the hope that the federal government would also provide the same amount of allocation for the purpose.

“Such amount (RM2 billion) is required for us to, among others, lay down the fibre optic, cloud computing and satellite to cover the whole of Sarawak,” Abang Johari told a press conference after giving the Chief Minister’s keynote address to the state civil servants here yesterday.

On the time frame, he said the construction of basic ICT infrastructure to cover all areas in Sarawak must be done within the next four to five years .

“We want to provide high speed Internet connection of up to two terabits per second and if this can be implemented, then we can really transform the economy, including rural entrepreneurship.”

Abang Johari said for the state to progress,  the people could not avoid technology because it’s going to be the ‘in thing’ in the future.

“Therefore, we have to go towards this sort of era because the success of the future will be based on technology and you are going to produce entrepreneurs who can command technology.”

Aware that the construction of ICT infrastructure would be costly, Abang Johari said the state government would not totally depend on federal funding but also to come up with its own financial model for strategic projects like ICT.

“We understand that in the Federal Constitution, the federal government has an obgligation towards Sarawak. Secondly, they are also facing constraints in certain sectors  related to strategic industries,” he said, adding that the state must have its own funding for strategic projects.

Abang Johari said the Malaysian Communications and Multimedia Commission (MCMC) would continue to help Sarawak to improve the connectivity but it would not be sufficient in meeting the state’s requirement for faster Internet connectivity.