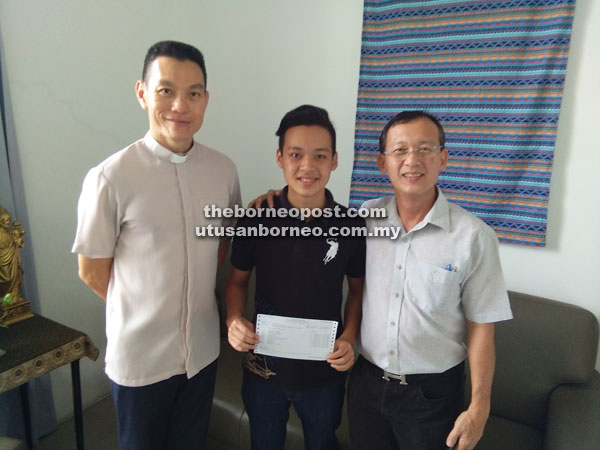 Father Francis (left) with Sau Jee and his father after getting the results.

School principal Father Francis Lim told The Borneo Post that he was very happy with the results.

“Since the inception of the private school in 2012, we are very proud of our students’ achievements and the hard work of our staff in preparing them for this public examination.

“We will continue to provide the best education for our students and we always strive for excellence,” he said.

Father Francis said a total of 99 students sat for the examinations, out of whom 69 were in science stream and 30 in arts.

Sau Jee who scored 11 A+s was excited and relieved that his hard work had paid off.

Sau Jee’s ambition is to be an engineer and he will be going to one of the colleges in Kuala Lumpur to further his studies.

“I will hold a small celebration with my parents,” he said.

His father Lau Yeo Koo, a businessman, said his son was studious and his SPM results were better than those of his elder brother’s.

“He proved to himself that he can do it. I see it as an extraordinary feat,” said the senior Lau.