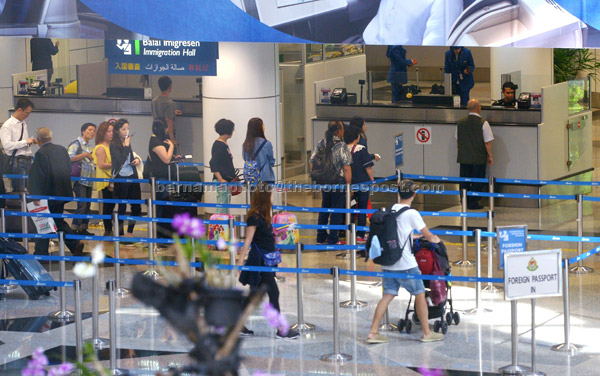 MAHB is expected to be the major beneficiary from the recovery of air travel demand in Malaysia as well as on-going land development initiatives under KLIA Aeropolis Masterplan. — Bernama photo

KUCHING: Malaysia Airports Holdings Bhd (MAHB) has been continuously reporting passenger movement growth in Malaysia since mid-2016 and analysts expect the positive trend to continue in 2017.

In a report, the research arm of Hong Leong Investment Bank Bhd (HLIB Research) pointed out that the airport operator has been recording five per cent year-on-year (y-o-y) passenger growth since mid-2016, for its operations in Malaysia.

“We expect the positive trend to continue in 2017, driven by growing tourist arrivals and resilient air travel demand by locals as well as capacity expansion by major Malaysia-based airlines.”

MAHB is expected to be the major beneficiary from the recovery of air travel demand in Malaysia as well as on-going land development initiatives under KLIA Aeropolis Masterplan.

Meanwhile, MAHB’s targeted passenger movement growth of 6.5 per cent for 2017 is achievable with upside potential.

“Under its second five-year strategic plan Runway to Success 2020, MAHB is transforming the surrounding land of KLIA and KLIA2 into KLIA Aeropolis, leveraging on strong passenger traffic growth.

“For the past few years, there were several developments in areas surrounding KLIA – which are Nilai, Sepang, Dengkil, Cyberjaya, Putrajaya and Enstek – which will increase the population within the area.

“Furthermore, the connectivity to KLIA Aeropolis has been continuously improved through road, rail and land. The proposed new highways – MEX extension, WCE and SKLIA Expressway will all be linked to KLIA Aeropolis.

“In mid-2016, MAHB had also entered into outright land lease agreements with several logistic and MRO players, which are expected to contribute positively to MAHB by FY18,” HLIB Research explained.

Aside from that, the research team pointed out that despite the recent slowdown in ISGA traffic, MAHB remained optimistic on ISGA long term growth.

“Management is spending 20 million euros capital expenditure (capex) to expand the terminal capacity to 41mppa by 2018 (from current 33mppa), as current utilisation already achieved 90 per cent.

“We are not overly concerned on the recent downturn of ISGA, as ISGA has strong operational cashflow and is self-sustaining, without the need of financial assistance from MAHB,” it commented.