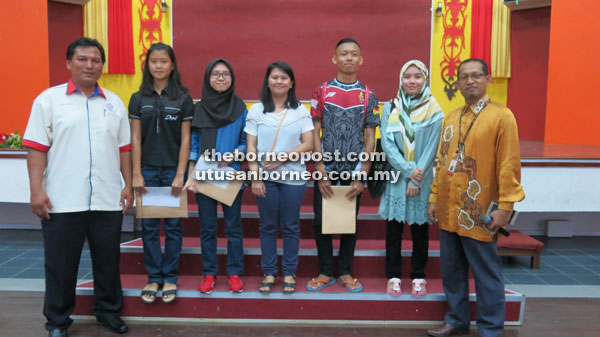 Zaki (right) and another teacher (left) with five of the top students who turned up to collect their result slips yesterday.

Having attained the same  School Average Grade (GPS) of 2.70, MRSM Betong and Mukah were joint seventh best among schools in the state, while their Kuching counterpart (MRSM Kuching) obtained a GPS of 2.31 to take the 10th spot, revealed MRSM Betong Principal Mohd Zaki Ab Rashid.

This year’s results showed a slight decline compared to the previous year’s GPS of 2.36, Zaki said.

They had anticipated the outcome after taking various factors into consideration including their performance as the pioneer batch in the PT3 examination in 2014; and the change of format in some subjects such as Additional Mathematics.

MRSM Betong had relaxed the minimum qualification for new entries to 3A (instead of 5A) in the Ujian Penilaian Sekolah Rendah (UPSR) examination, Zaki disclosed.

According to him, a total of 106 students sat for the 2016 SPM and all obtained at least a grade A which he believed qualify them for the Matriculation course.

Of those who obtained more than 1A, eight scored straight 10 or nine As, he revealed.

He hopes that they will be able to pursue tertiary education in local and overseas universities.