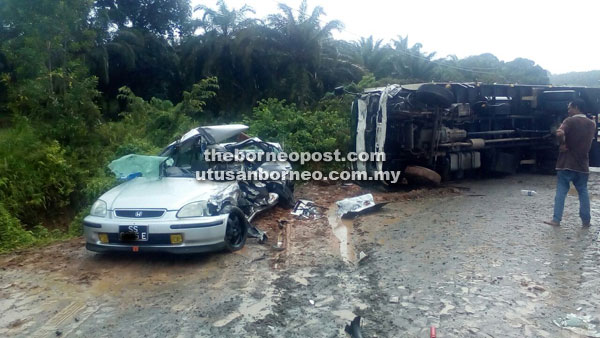 The wrecked car and lorry at the accident scene.

TAWAU: A 59-year-old passenger was killed when a Honda car he was travelling in collided with a three-ton Hino lorry at Kg Balung Cocos here at  2.57 pm yesterday.

The district Fire and Rescue Department received a call at 2.57 pm and sent out two fire engines with six firemen to the scene, some 40km from Tawau Town. The rescue team  arrived at the scene at 3.33 pm.

The deceased, Abdul Mansur bin Abu Kassim, who was   the front seat passenger, was killed on the spot.

The car was badly damaged in the collision while the lorry landed on its side.